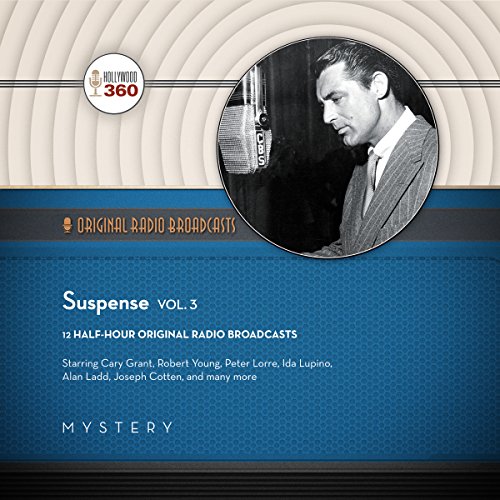 Conceived as a potential radio vehicle for Alfred Hitchcock to direct, Suspense was a radio series of epic proportion. It aired on CBS from 1942 to 1962, and is considered by many to be the best mystery/drama series of the golden age. Often referred to as "Radio's Outstanding Theater of Thrills", it focused on suspenseful thrillers starring the biggest names in Hollywood. Early in the run, the episodes were hosted by the "Man in Black" who, from an omniscient perch, narrated stories of people thrown into dangerous or bizarre situations with plots that, at the very end, usually had an unseen twist or two. Hollywood's finest actors jumped at the chance to appear on Suspense, including: Cary Grant, Jimmy Stewart, Alan Ladd, Henry Fonda, Humphrey Bogart, Bette Davis, and Orson Welles. Scripts were by John Dickson Carr, Lucille Fletcher, James Poe, Ray Bradbury, and many others. Running more than 20 years, Suspense aired nearly 1,000 radio broadcasts. It made the transition to television in 1949, but it was on radio that Suspense enjoyed its glory days.

What listeners say about Suspense, Vol. 3