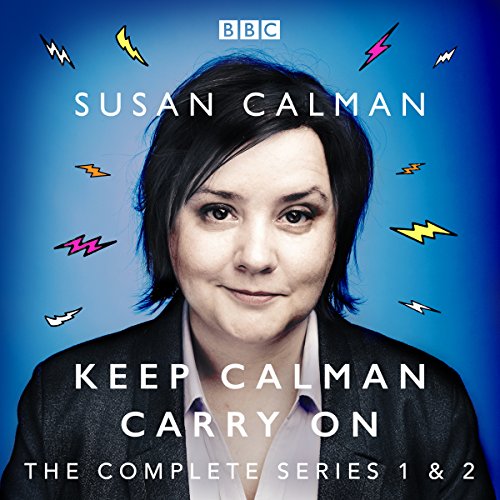 Susan Calman is the least relaxed person she knows. She has no downtime, no hobbies (unless you count dressing up your cats in silly outfits), and her idea of relaxation is to play Assassin's Creed, an hour into which she is in a murderous rage with sky-high blood pressure.

Her wife had to threaten to divorce her to make her go on holiday, and she's been told by the same long-suffering wife that unless she finds a way to switch off, and soon, she's going to be unbearable. Susan decided her best bet was to try to immerse herself in the pursuits that her friends find relaxing, to find her inner zen and outer tranquillity.

In the first series of this show she attempted to ditch the old Susan Calman and attempted to find the new 'Susan Calm' by watching cricket with Andy Zaltzman; going hillwalking with Muriel Gray; visiting an art gallery with Phill Jupitus; and taking a spontaneous holiday with John Finnemore. She enjoyed these pursuits but all too soon found herself slipping back into her old ways. So she tried again in series 2, which involved learning about gardening with Val McDermid, going to a music festival with Robin Ince, trying her hand at baking with the Great British Bake Off's Selasi Gbormittah, and having a go at bird-watching with Emma Kennedy.

Keep Calman Carry On is a stand-up show in front of a live audience, in which Susan reports on how successful she's been - both at relaxing and at the pursuit itself - as well as playing in and discussing a handful of illustrative clips from her efforts. It's an attempt to find out how people find solace or sanctuary in these worlds and how Susan can negotiate her own place in them.

What listeners say about Susan Calman: Keep Calman Carry On

Brilliant listen that I couldn’t not binge on & completed it all in one sotting! Love it! Witty, amusing & totally relatable. Just brilliant!

My favourite lady gay in a collection of radio shows. if you like to laugh you'll love it. If he hate gays you won't and yer a miserable old ##^$$ if ye don't like us.

Seriously though I love anything by her she makes me laugh and I want her for the next Doctor Who.

SHE'S sitting by the phone BBC. ALL NIGHT LONG WAITING FOR YOUR CALL! Make her the next Doctor already. :D

Her usual fascinating insight into the world.

Every episode a joy! And great guests to keep it varied. Properly funny! Highly recommended.

Loved it and i have enjoyed listening to it again and again. I would highly recommended this audio.

A joy to listen to

There's something delightful about a woman who's prepared to share her anxieties with the world, and bravely have a go at all sorts of things in the hope they may help her relax. There's great humour in the narrative that forms the framework around recordings of Susan Calman trying out various pastimes, and then there's the spontaneous humour, affection and enthusiasm expressed by all of those trying to explain why they enjoy their particular pastime so much. If you love humour that has a strong undercurrent of affection, warmth and joy of life in it, this is just the listen for you

A wonderful and funny insight into relaxing!

great listening! and if you want encouragement to try new things ....this is it in a very humourous style.

A breath of fresh air

This made me smile and laugh so much.Susan Calman has such a lovely way about her.A real person with real hang ups and quirks.I loved how she shares her thoughts and hang ups in such an amusing way.

Loved this. Susan is a brilliantly funny & honest comedian. more from this lady please!