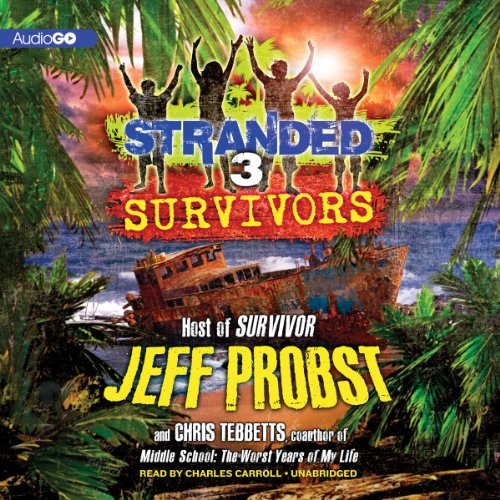 By: Jeff Probst,Chris Tebbetts
Narrated by: Charles Carroll
Try for $0.00

Eleven days down, and no end in sight. How long could you survive?

It's been days since Buzz, Vanessa, Carter, and Jane were stranded on a deserted island in the middle of the South Pacific. Four kids left to fend for themselves. No adults. No supplies. They've managed to make fire and they've even found food. But they've just lost their only shelter and quite possibly their one chance at being rescued. Now they'll have to venture even deeper into the jungles of Nowhere Island just to stay alive. But the island holds secrets of a dark past. With danger lurking at every turn, they must rely on each other like never before if they are going to survive.

What listeners say about Survivors

It seems like they just used Probst for name recognition. Did he do any writing? You be the judge. Nice story. Written for younger readers.

Great book my son loved it..

We listen to audio books during car rides. Just awesome. Gets your kids thinking about worse cases situations.

I love reading books meant for kids. The three book series is one that any age can enjoy. There are good lessons on this book on working together and everyone has strengths.
The reader is very good.

i really enjoyed these books , it kept me spellbound,wanting to know what came next.