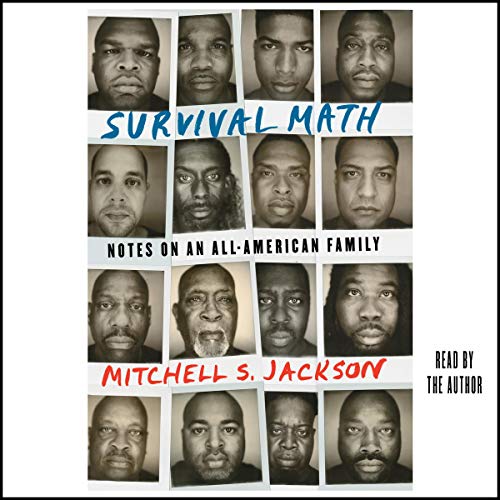 In a thrillingly alive, candid new work, award-winning author Mitchell S. Jackson takes us inside the drug-ravaged neighborhood and struggling family of his youth, while examining the cultural forces - large and small - that led him and his family to this place.

With a poet’s gifted ear, a novelist’s sense of narrative, and a journalist’s unsentimental eye, Mitchell S. Jackson candidly explores his tumultuous youth in the other America. Survival Math takes its name from the calculations Mitchell and his family made to keep safe - to stay alive - in their community, a small Black neighborhood in Portland, Oregon, blighted by drugs, violence, poverty, and governmental neglect.

Survival Math is both a personal reckoning and a vital addition to the national conversation about race. Mitchell explores the Portland of his childhood, tracing the ways in which his family managed their lives in and around drugs, prostitution, gangs, and imprisonment as members of a tiny Black population in one of the country’s whitest cities. He discusses sex work and serial killers, gangs and guns, near-death experiences, composite fathers, the concept of “hustle”, and the destructive power of drugs and addiction on family.

In examining the conflicts within his family and community, Jackson presents a microcosm of struggle and survival in contemporary urban America - an exploration of the forces that shaped his life, his city, and the lives of so many Black men like him. As Jackson charts his own path from drug dealer to published novelist, he gives us a heartbreaking, fascinating, lovingly rendered view of the injustices and victories, large and small, that defined his youth.

What listeners say about Survival Math

If you need help sleeping, purchase this and listen in a nice comfy space as the narrator's voice conducts you into a deep and relaxing slumber. It was a shame because the content seemed very intriguing during the sample. However, no matter what environment I listened in, the narrators tone hypnotized me into a deep slumber. After the 3rd attempt at listening and dosing off again, I had to go ahead and rate it a 1 star for performance. Please Mr. Jackson, find a better narrator, the content seems amazing and I'd hate for readers/listeners to miss out just because of your reading style.

I heard an interview with Mitchell on NPR and decided to get his book. A great listen and interesting story. I dont finish a lot of books (even on Audible). This one I did. His reading was a tad slow for my liking, but adjusted to 1.25x was perfect for me and I liked that he narrates it himself.

Mitchell Jackson is a great writer who has put his life stories into print. As a Portland, OR native, I could visualize each scene as he creatively tells his story in this book. I read this book but it was even more powerful listening to Mitchell read it. Loved it!

Representing N.E.P. on center stage. Thank you for sharing your narrative through eyes brown like mines.

This is a good and necessary read for all. However the audible version is very difficult to get through. Author is not a good reader. Due to weight of the content some things are missed. The book is timely and relatable for 2020.

A unique approach to memoir

the author/narrator did a great job telling the stories. The stories are heartbreaking and inspirational

I was hoping to get a clearer picture of this community in Portland that's being rapidly wiped put by gentrification. I didn't get a liner narrative but dramatic highlights about breakups, arrests, domestic incidents etc. that rapidly jump from one time period to another with little to no neuance or details of everyday life. There are also these mammoth historical asides about Ancient Greek Law, opera, the cultivation of apples, etc that are thematically relevant but feel overbearing and tangential. There were some bits about Oregon's uniquely sordid history of segregation, but they mostly stay in the introduction.

The narration definatley feels like something from a mandatory school assembly rather than an audio book.

A book that grows on you

A fascinating tale about growing up on the wrong side of the tracks in Portland, OR.
This is a story that grows on you, and you are genuinely sad when it ends, although happy that the author is alive.

I think this might have been a good book if the author left the narration to someone else.

A window into another part of my hometown

Mitchell Jackson had a wonderful way with words. His mashup of academian vernacular and words from the streets is artful and endlessly enjoyable.

I grew up in the same place and there were parts of my life I saw in Jackson’s. There were also parts of Jackson’s story that was so different from my own it was like we lived in two separate towns. Which, in a way, we did thanks to an accumulation of institutionalized racism.

A beautiful telling of a complete story. Jackson shares the all the parts, pretty and shameful, gentle and violent, sincerely. The thing I appreciate most about the telling of this story is the appreciation of process. We are all somewhere on our journey and will never be finished.