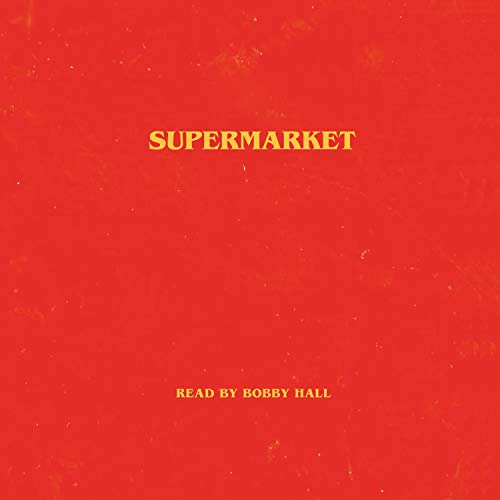 The stunning debut novel from one of the most creative artists of our generation, Bobby Hall, a.k.a. Logic.

“Bobby Hall has crafted a mind-bending first novel, with prose that is just as fierce and moving as his lyrics. Supermarket is like Naked Lunch meets One Flew Over the Cuckoo's Nest - if they met at Fight Club.” - Ernest Cline, #1 New York Times best-selling author of Ready Player One.

Flynn is stuck - depressed, recently dumped, and living at his mom’s house. The supermarket was supposed to change all that. An ordinary job and a steady check. Work isn’t work when it’s saving you from yourself. But things aren’t quite as they seem in these aisles.

Arriving to work one day to a crime scene, Flynn’s world collapses as the secrets of his tortured mind are revealed. And Flynn doesn’t want to go looking for answers at the supermarket. Because something there seems to be looking for him. A darkly funny psychological thriller, Supermarket is a gripping exploration into madness and creativity. Who knew you could find sex, drugs, and murder all in aisle nine?

What listeners say about Supermarket

the story unfolds intensely every minute, up until the end. the end of course.. was perfect. super grateful to have been a fan of logic.

Bobby is an all around genius

I loved the book and got so hooked I finished it in a day. Loved listening to the audiobook being read by Bobby himself, really made it feel a lot more personal. Can't wait for The Maker ;)

Just finished this book, in two days, wow. It was so good, no words can represent what the emotional roller-coaster I've just experienced, the writing was phenomenal and the pacing was absolutely brilliant.

so good,can't wait for the next big thing. Thank you for this amazing book.

If you like Logic / Bobby, you’ll love everything about this novel. The storytelling is incredible, the narration, the plot, the writing.

5*/5* in every department, the plot had me gripped the entire way through, and having himself narrate it really made it that bit better as well. I’m not much of a reader but am starting to listen to books on here instead, and had no trouble keeping myself coming back to listen to this.

If you enjoy Logic / Bobby, you’ll absolutely love this novel.

This audio book is absolutely fantastic it had me hooked from start to finish!

The best book ever

I love this book if you want a book with a big plot twist at the end this is the book for you ow my god this is soooooo goooood . I loved it sooooo much beat book Ik by far can’t wait for more books by logic / Bobby

I don’t understand what it was from bobby’s voice to the huge plot twist. All I know is that this book is wowing

Although the book felt like reading a screenplay, it truly mesmerised me. Bobby has a lot of potential towards being a writer, he is extremely talented. This book is not only for the Logic fans, but it is for any person who enjoys a fast-paced story. Supermarket is a brilliant way and example of escapism, I very much enjoyed my time reading the story. The audiobook makes it sound even better, especially with the use of the soundtrack, which I really appreciate and admire. I look forward to Logic's future projects in novels. Definitely not not for a person's first novel, a near flawless read!

Just what i expected! Great book!

Just what i expected! Great book!
And will wait for more from Bobby Hall aka Logic!

exciting and thought provoking. looking forward to another book by Bobby Hall aka Logic :)