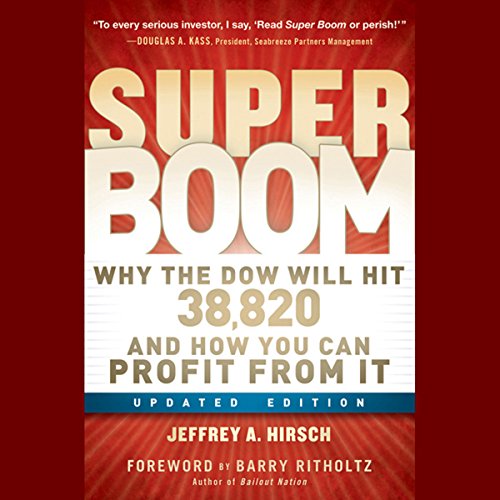 Super Boom: Why the Dow Jones Will Hit 38,820 and How You Can Profit From It

Super Boom: Why the Dow Jones Will Hit 38,820 and How You Can Profit From It

By: Jeffrey A. Hirsch,Barry Ritholtz
Narrated by: Christopher Robin Miller

Prosper from the profitable opportunities of the next financial market super boom.

In 1976, Yale Hirsch predicted a 15-year super boom - a move in the stock market of 500% or more. His forecast proved accurate as the market rose and continued upward, eventually posting growth over 1,000% just before the tech crash in 2000. In Super Boom, Jeffrey Hirsch, president of the Hirsch Organization and editor in chief of the Stock Trader's Almanac, unveils the next market expansion. Building on his father's research from 1976, Hirsch has discovered that meteoric rises in stock indices are due to specific catalysts predominantly outside of the financial markets.

History has a way of repeating itself, especially in the financial markets. The American economy, and subsequently the world economy, has always existed in a cycle of boom and bust: gold, grain, oil, technology, and most recently, real estate, have all bubbled and popped. The key to investing profitably is spotting macroeconomic historical trends and positioning to reap the benefits. Step-by-step, Hirsch puts together the pieces of this puzzle by revealing the central drivers of a super boom.

As markets and economies struggle over the next several years, remember to keep your eye on the future and get ready for the coming super boom and the next 500% move in the market. With this book as your guide, you'll benefit from the insights that only Jeffrey Hirsch can provide.

The boom is the author hitting you in the head

What disappointed you about Super Boom: Why the Dow Jones Will Hit 38,820 and How You Can Profit From It?

The author spent a large amount of time citing facts, but not enough time convincing me that actually prove the hypothesis. I felt like I was being pelted with facts.

What was most disappointing about Jeffrey A. Hirsch and Barry Ritholtz ’s story?

The actual story was only a small part of the book.

Would you be willing to try another one of Christopher Robin Miller’s performances?

Maybe, I felt the voice was chosen to give credibility to the story. If anything, to me it was a distraction.