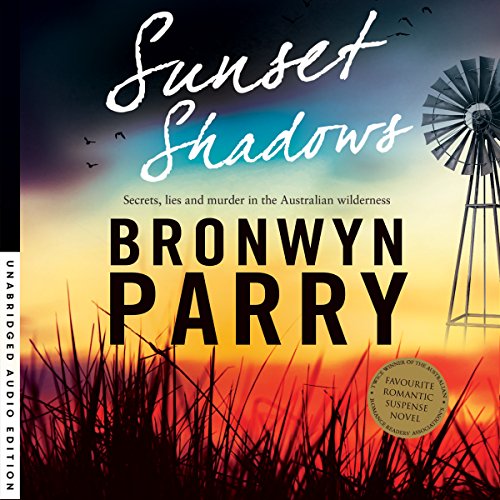 By: Bronwyn Parry
Narrated by: Wendy Bos
Try for $0.00

Secrets, lies and murder in the Australian wilderness....

A nail-biting new novel of romantic suspense by the award-winning author of Dead Heat and Storm Clouds, Bronwyn Parry.

'Dammit, Tess, he doesn't seem worth protecting.'
'I'm not protecting him, Sarge,' she said. She dropped her gaze, biting her lip, and for the first time in his experience she spoke in a small voice. 'I'm protecting me.'

For police officers Steve Fraser and Tess Ballard, a split-second decision saves the lives of 50 members of a cult - but also puts their careers on the line. Tess' work is everything to her; she's forged a new life through sheer determination, so when her past returns to haunt her, Steve must race through wild country if he is to save the people he most cares about.

In Sunset Shadows, the thrilling new audiobook by multiaward-winning author Bronwyn Parry, you will feel immersed in the dramatic beauty, isolation, wind and the sun of the deep Australian bush - and its sinister shadows....

About the author: Bronwyn Parry grew up surrounded by books, with a fascination with places, people and their stories. Her first novel, As Darkness Falls, won a prestigious Romance Writers of America Golden Heart Award in 2007. Her second and third novels, Dark Country and Dead Heat, were voted the Favourite Romantic Suspense Novel by the Australian Romance Readers Association (ARRA) in 2010 and 2013 and were both finalists in the Romance Writers of America RITA Awards and the Daphne du Maurier Award for Romantic Suspense.

Her fourth novel, Darkening Skies, was a finalist in the ARRA Awards in 2014. Bronwyn's fifth book, Storm Clouds, was short-listed by ARRA for Favourite Romantic Suspense Novel of 2015. She lives in the New England tablelands in New South Wales and loves to travel in Australia's wild places. For more information visit www.bronwynparry.com or www.facebook.com/BronwynParryAuthor.

"[Bronwyn] remains firmly in my autobuy list." ( Booktopia's Romance Buzz)
"Beguiling mix of Australian bush, appealing characters and light romance...an enjoyable novel. Recommended." ( Readplus on Storm Clouds)
Praise for Bronwyn Parry: "Loyalty and romance combine with all the action to make a memorable story." ( Woman's Day)
"There is a strong romantic plotline...while the suspense is so well maintained the novels qualify as rattlingly good crime reads." ( The Australian on As Darkness Falls and Dark Country)
"This page-turner of a book is both exciting and romantic.... Verdict: chilling." ( Weekend Gold Coast Bulletin)

What listeners say about Sunset Shadows

brilliant book...all Bronwyn's books are brilliant. a must read for those who love a good Aussie romance and crime book set in a rural setting.

I was thoroughly immersed in this wonderful novel set in remote parts of NSW, Australia. The story of people caught up in a pseudo religious cult was told with great insight and sensitivity. The difficulties face by the police in such a remote and sparsely resourced region, the role of the media and the personal needs and aspirations of the various characters were handled very well. Highly recommended.