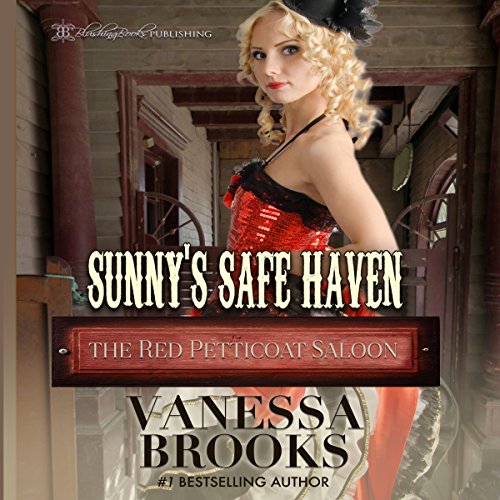 By: Vanessa Brooks
Narrated by: Dan Pillsbury
Try for $0.00

Stephanie Kendrick is a young woman living in Culpepper Cove. She has been dating her young man, Kelly, for a number of months when she is compromised by him. She soon discovers that she is with child, but Kelly, her secret fiancé, immediately disowns her. Desperate to marry him, she confides in her father expecting his support and help with forcing a marriage between her and her erstwhile beau. However, when he turns her out into the street, Stephanie finds her only refuge is the local bawdy house, the Red Petticoat Saloon. She finds support and friendship within the walls of the saloon and when Madam Jewel gifts her with her new gem name after the beautiful sunstone, Stephanie decides to remain there working as a new gem, Sunny.

There have been a number of gold thefts en route from the co-operative Merit Mine and Patrick Tey, a gunslinger, is hired to protect the shipments of gold being brought down from the mine to the bank. Tey arrives in town unprepared for the sight of a pretty young woman being attacked by her own father. He quickly finds the appealing blonde is on his mind day and night, and before long he is smitten. Pursuing her proves problematic. Sunny is convinced her path lies elsewhere; she fully intends living as a can-can dancer at the Red Petticoat, joining the other pretty gems who work and live in the Californian gold rush town of Culpepper Cove.

Tey has his work cut out for him on two fronts. Uncover the identity of the thieves and convince Sunny that while he adores her dancing skills, he wants to be the sole member of her audience. Will Sunny allow herself to believe she can be loved even though she is a fallen woman - often falling over the handsome gunslinger's lap?

Disclaimer: This audiobook contains the spanking of adult women and explicit sexual scenes. If any of these offend you, please do not purchase this audiobook.

About The Red Petticoat series:

The Red Petticoat Saloon series is a collection of books written by number one and USA Today best-selling authors. Each book tells the unique story of a different woman, "a gem", who comes to the saloon to find a safe haven and discovers they become part of a family. Recurring characters appear in each book to allow listeners a continuity as they learn about the women who have learned to bend but have not broken under the harshness that life has to offer. It is a series where strong, loving men find not only entertainment at the saloon but the special women who reside under its roof.