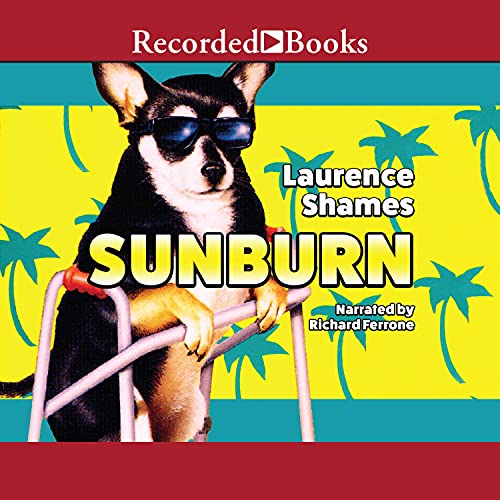 By: Laurence Shames
Narrated by: Richard Ferrone
Try for $0.00

Listeners across the country have fallen in love with Laurence Shames’ rollicking national best-sellers set in South Florida. Energetic, forceful and unpredictable as a hurricane, Sunburn is filled with off-beat characters, top-notch suspense, and colorful dialogue. When aging Mafia godfather Vincente Delgatto flies to Key West to get a little sun, he decides to write his memoirs. When word of the book hits the street, everyone is in danger, even the octogenarian former enforcer Bert the Shirt and his cranky chihuahua.

What listeners say about Sunburn

Still waiting for a laugh

Would you try another book from Laurence Shames and/or Richard Ferrone?

No, don't think so. This was just not what I was led to believe it would be.

What was most disappointing about Laurence Shames’s story?

It is no where close to Hiassen or Dorsey's humor, or characters. The story just rambled, hard to tell who was who. Best part of whole book was when the dog pooped.

Would you be willing to try another one of Richard Ferrone’s performances?

Hard to say, for free, maybe.....he just did not give the characters real voices.

If you could play editor, what scene or scenes would you have cut from Sunburn?

The whole book? While the storyline is a good one, the writing just did not follow through.

I have very rarely given a truly bad review. So I hate to write this one. However, I must say this book was nothing close to a Hiaasen or even Dorsey. I found literally nothing humorous in the book at all. The characters all ran together, nothing stood out at all. The narrator either couldn't or choose not to use different voices for each one, so you could not tell who was who.

Do I think I would listen to another Shame's book? I really don't know. This storyline could have, should have been funny. Really. But after this listen, I think I will shy away from another one by this author.

OK story, but NO WAY a Hiaasen, or Dorsey

I'm really good at making analogies - at times very far-fetched ones - check my other reviews if you don't believe me. And this book, although nicely written with some vaguely interesting characters and just a whiff of south Florida atmosphere, Is NOT A BIT LIKE even the dullest Hiaasen, and even less like Dorsey's inspired madness. I got it in a really cheap Whispersync deal, and I got what I paid for, Be warned.

Laurence Shames and Richard Ferrone are once again a wonderful team. Key West is again the setting. The story centers on Vincente Delgado, the aging capo di tutti capi, and his family. His bastard son Joey Goldman, his full-blood son Gino Delgado, his retired consigliere Bert the Shirt, and more: This world is created and sustained throughout a sustained comic but serious tale of aging, family ties, romance, danger and surprise. Shames is one of the funniest authors in my experience, and one of the few who can create a full-length novel which is a perfect mix of suspense, humor, love for his characters and with no phony deus ex machina artifices. The FBI is involved, but only in a peripheral way. The godfather decides to write a book in his waning years, and he recruits a Key West newspaperman, Artie Magnus, to ghost-write. Gino brings a bimbo, Debbie, down to the keys with him, and everything Gino touches turns to dreck. Everyone gets involved in the dangerous cleanup. The wisdom of the Godfather and of Bert the Shirt are touching and painful: two Sicilian guys who had no real choice but to follow in the path of their fathers and grandfathers. Richard Ferrone once again is spectacular. All of his voicings are consistent with who we think these people might be. I can't think of anything in this book that I would cut out, or anything I would add. This is very satisfying and very moving reading. The characters are full, sad, ambitious, romantic and altogether American, once you think of it. Their heritage is Sicilian. The Mafia is fading, but not gone yet. Thank goodness Mr. Shames used his gifts for such wonderful work.

best of the first three

this book far eclipsed book two and dovetailed nicely with one. the characters are comfortable now and you can picture them clearly.

I was hoping this author's books were similar to Carl Hiaasen's and was very disappointed that this book anyway, was not near as well written. I kept waiting and waiting for it to get better as the reviews were very good, but I just could not get interested in the story or the characters. I failed to see the humor in the story and finally gave up on it. Maybe other books by this author are more enjoyable and I started out with the wrong one, but I guess I will never know as I would not purchase another one at this time.

Another great read by Richard Ferrone. The Paradisio continues to rent to interesting tenants. This story picks up from #1 in the the series for a needed resolution to some loose ends.

Perfect follow up to Florida Straits! I’ll definitely be on to the next one, Mangroves Squeeze I believe...

What made the experience of listening to Sunburn the most enjoyable?

I liked the subtle, some would call rather dry humor that develops as Shames fleshes out each memorable character. I oftentimes found myself going back and listening to some dialogue between character's again, which is very rare for me, and when I heard it a second time, I'd find myself laughing out loud.

What was one of the most memorable moments of Sunburn?

Anything involving Bert the Shirt, and his faithful old chihuahua. Bert is aged, retired mob soldier, who although a criminal in every respect, follows a strict mob-based moral code, which is compelling and at times hilarious, as he discovers that not everyone shares his ethics today. I also enjoyed where Bert finds a cure for his chihuahua's chronic constipation, and the palpable relief they both feel when it finally comes to an end.

Have you listened to any of Richard Ferrone???s other performances before? How does this one compare?

No, but I plan to listen to them all..

If you enjoy Hiaasen or leonard, then you will most certainly like this story. It is different than either of these author's, but in a good way.

I liked this, as after the first book of the series I felt I could see the characters developing, partly due to good narration. It's not a classical masterpiece but it is a good listen.