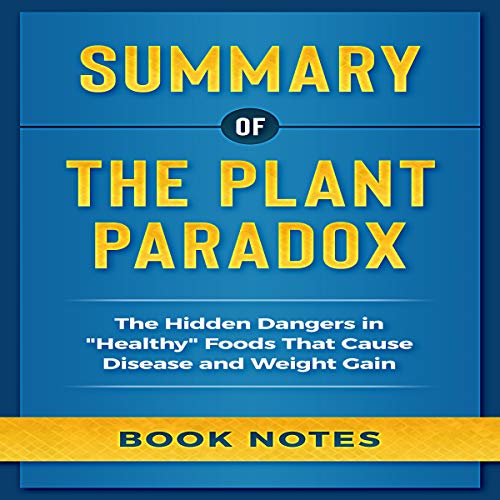 Summary of: The Plant Paradox

By: Book Notes
Narrated by: Norman Tomchak
Try for $0.00

If you are looking for new beginning in life, then you should look no further than the “Plant Paradox Program” instituted by cardiovascular surgeon, Dr. Steven R. Gundry. Dr. Gundry has spent many years in the field treating patients suffering from a wide range of ailments. Many of these ailments were autoimmune diseases such as psoriasis, asthma, and Crohn’s disease. At first, Gundry struggled to treat his patients with conventional methods, but they only seemed to get worse. But then he found a common thread in their suffering - they all partook of diets that consumed a large amount of plant-based lectin.

Gundry then had his patients dramatically reduce this lectin intake and was astonished at the results. His patient’s disorders managed to correct themselves, and they also lost a lot of weight in the process. In short, they were healthier and happier than ever before simply by tweaking their diet. The interesting thing about Dr. Gundry’s discovery was that his patients whom he had “cured” in this manner were not junk-food junkies, they were individuals who worked out and ate what they believed to be “healthy diets” with plenty of veggies.

It was then that Dr. Gundry understood the paradox that they faced. He realized that even though vegetables are indeed good for us, if too much of certain kinds of veggies are eaten in certain ways, it can have disastrous consequences. It was then that Grundy devised his plan to walk us through the mine field.

If you do not have the time to go through some of the lengthier material in his text, then this book is perfect for you. This summary highlights the most important aspects of Grundy’s "Plant Paradox Program", allowing you to jump right into the mix. Buy this book today!

What listeners say about Summary of: The Plant Paradox

This is a good audiobook for anyone but I feel very for us that have health problems. I nevermore knew lectins found in grains, beans, and seeds could be harmful. He has a complete list of foods including lectin and assistants for each.

This audiobook is an eye-opener and has helped me get on track with the correct foods to eat. It's never too late to change my diet and I'm all for eating healthy.

It appears weird because some of it straight denies what we have always heard about nutrition (meat=bad, vegetables=good). The writer does a very good job of describing why not all vegetables are as healthy as you have been told.

My husband who newly converted 50 has begun to have issues with his cholesterol and blood pressure. This came out of nowhere because he has a healthy, often vegan diet. I believed this was a very unusual thought.

A great source for any person looking into healthy food and creating diets. Simply put and easy to follow. Must audible.

I feel so much better and healthier.

This audiobook accommodates right and makes belief to those mistakes to give dieters a chance to lose weight. It is something that wants to be learned twice to take it all in.

I got this audiobook very enlightening for dieters. It’s essential to know what you are putting in your body and how you are doing it since so many diets have put out incorrect or lacking information and then the diet does not benefit the dieter.

This Audiobook will explain to you all the causes which induce tiredness, weight gain, chronic body aches as well as a whole host of health problems.

Good book for those on a plant based diet.

This audiobook will explain to you all the causes which cause tiredness, weight gain, chronic body pains as well as a whole host of health issues.

Every chapter includes key tips for easy future reference, along with a more detailed analysis. It is concise without feeling rushed and embraces everything held in the source guide in an easy to digest (pun intended) manner.

I had decided to get the summary to see if the original would merit purchase. I am always skeptical of any "1 thing is to blame/fixes everything" claims and in this case I feel rightly so. whilst I don't disagree that there is some scientific merit to the arguments put forward, it is never the whole story. So, I will not be buying the original.

The summary book itself does a great job to condense the original, the science is quite dumbed down but you would expect as such and it may have been so in the original. The arguments are presented in a largely unbiased way and very easy to follow.

The narrator did a great job, with an interesting tone and cadence. Whilst I might not recommend the original, I will certainly be looking for more books by this summary company.

very boring. Google Leictens and then dont eat them is all you need to know

The writer invests many years of research to write this book and to come up with many of his ideas. The purpose of why this book was titled “The Plant Paradox” is that there are some plants we can eat in plenty without getting sick.

I would have recommended for this book.

This is wonderful! I feel so much better and healthier. I have slowly made some changes so I can’t wait to see the full range of the program! Superexcellent data!!!

I have been following Plant Paradox now for over one year. This audiobook streamlines the meal plans and includes simple to follow meal prep guides. Highly suggest for anyone needing to feel better and lose weight!

For anyone going into commerce

I remember too many it may feel difficult to cut out these foods but it is surely worth it. Your health is everything. I am getting this book an easy , very interesting and he gets right to the point.

Summaries are more to the point and practical, this is what I needed to know about plant paradox it looked out everything very well, simple to understand.

It's so much info in that audiobook it's like you have to investigate what you understanding too! Good audiobook with a lots of info.

I really liked listening to it this. It was educational and not hard to follow. The information is helpful to all. It surely will make me take a closer look the next time I go shopping.

This audiobook was a very good to understand I was doing the analysis before to constantly doing a life change to vegan which I got good information that I wasn't informed, it is a good audible for knowledge for health problems and lifestyle changes