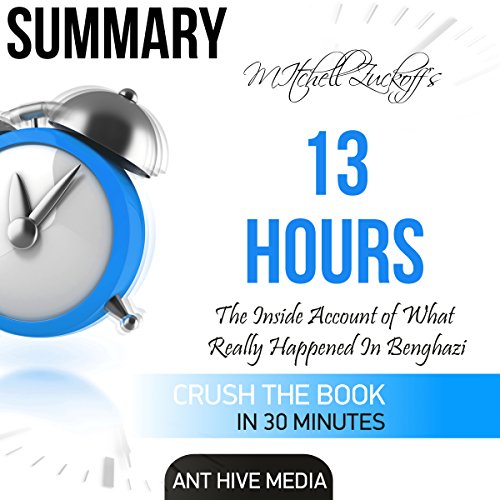 Summary of Mitchell Zuckoff's 13 Hours: The Inside Account of What Really Happened in Benghazi

By: Ant Hive Media
Narrated by: Tom Johnson
Try for $0.00

This is a summary of Mitchell Zuckoff's 13 Hours: The Inside Account of What Really Happened in Benghazi, the harrowing, true account from the brave men on the ground who fought back during the Battle of Benghazi.

This book presents, for the first time ever, the true account of the events of September 11, 2012, when terrorists attacked the US State Department Special Mission Compound and a nearby CIA station called the Annex in Benghazi, Libya. A team of six American security operators fought to repel the attackers and protect the Americans stationed there. Those men went beyond the call of duty, performing extraordinary acts of courage and heroism, to avert tragedy on a much larger scale. This is their personal account, never before told, of what happened during the 13 hours of that now-infamous attack.

13 HOURS sets the record straight on what happened during a night that has been shrouded in mystery and controversy. Written by New York Times best-selling author Mitchell Zuckoff, this riveting book takes listeners into the action-packed story of heroes who laid their lives on the line for one another, for their countrymen, and for their country.

13 HOURS is a stunning, eye-opening, and intense book - but most importantly, it is the truth. The story of what happened to these men - and what they accomplished - is unforgettable.

Available in a variety of formats, this summary is aimed for those who want to capture the gist of the book but don't have the current time to devour all of it. You get the main summary along with all of the benefits and lessons the actual book has to offer. This summary is intended to be used with reference to the original book.

What listeners say about Summary of Mitchell Zuckoff's 13 Hours: The Inside Account of What Really Happened in Benghazi

The topic was well covered for this just being a summary.

I liked that the highlights were covered without too much horrific detail. It was nice to receive a story based on facts without the person interjecting their own opinion. The narrator's voice captured my attention and had me focusing on the story. I stopped what I was doing to continue listening.

What made the experience of listening to Summary of Mitchell Zuckoff's 13 Hours: The Inside Account of What Really Happened in Benghazi the most enjoyable?

Your narrator was interesting to listen to as he told the story.

Bringing out the people involved and making them real.

What does Tom Johnson bring to the story that you wouldn’t experience if you just read the book?

Tom Johnson did an excellent job and helped bring the story alive in my minds eye.