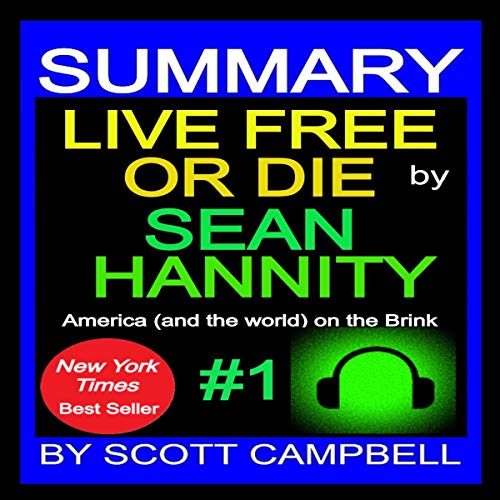 Warning!: If you are a Democrat don't listen to this audiobook. The facts about your party, now led by radical socialists, are embarrassingly despicable. If you are a Conservative or Independent and want to survive, then this audiobook and Sean Hannity’s are must-listen. Be aware that your family will always live under constant attack by socialists. Know why.

This is a best seller summary and analysis of LIve Free or Die by Sean Hannity. It is not the original book.

Important books demand widespread listenership and understanding. Live Free or Die is one of them.

Use this best-selling summary and analysis audiobook to:

In Live Free or Die: America (and the World) on the Brink, Hannity explores the rugged individualism, self-sufficiency, and the tenets of freedom that propelled America to greatness in a short time. No other nation ever amassed more wealth and power and created more means to advance the human condition.

Like an infectious and festering boil, leftwing resentment, radicalism, and elaborate plans for theft and graft grew in the shadows to undermine democracy beginning in the turbulent 1960s. After 60+ years of sustained effort, they comprise a formidable army of social justice warriors aided and abetted by such institutions as academia, the mainstream media, and the diabolical deep state which Hannity calls the "Leftist Juggernaut".

There could not be a more timely and important book.

Hannity makes his argument for a viable solution.

What listeners say about Summary of Live Free or Die: Sean Hannity