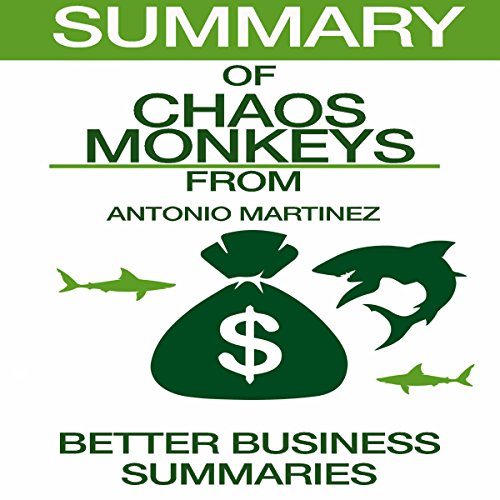 By: Better Business Summaries
Narrated by: Tom Johnson
Try for $0.00

A summary of Chaos Monkeys: Obscene Fortune and Random Failure in Silicon Valley.

The Facebook building looks like an aquarium. The merit of each office depends on approximation to Mark Zuckerberg or Sheryl, his advocate. If you are an important team member, they want you close. That said, you should know the ad team is located in an entirely different building. As the Facebook team meets, smart phones beep and flash. Antonio needs to implement ad initiatives, but Sheryl has already given him advice on what to say. Sheryl sees everything before Zuckerberg, and if ads and marketing ideas aren't prepared correctly, he gets bored and loses focus. This particular meeting dealt with social plugins to create an interactive Facebook. Instead of simply using Facebook data, they wanted to use all tracking history, using computer data to track interests of Facebook users. Additionally, they wanted to begin retargeting, which caused some controversy. No one really understood how it would all fit together, and no one could predict profits. Eventually, retargeting was approved, but the plug-ins were denied. This is a summary and analysis of the book and not the original book.

This audiobook contains a summary of the entire book, chapter-by-chapter breakdown, and an analysis of the listening experience.