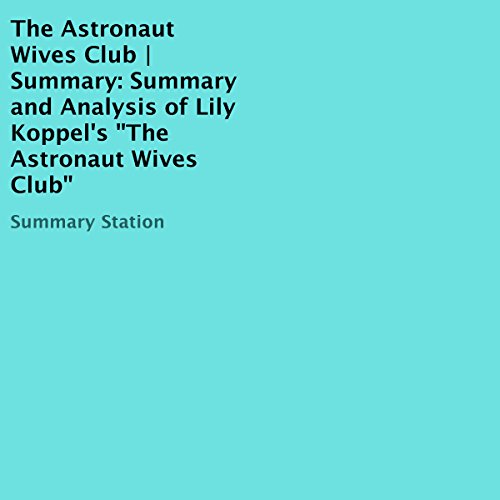 Summary and Analysis of Lily Koppel's The Astronaut Wives Club

By: Summary Station
Narrated by: Michelle Murillo
Try for $0.00

It is clear that the main objective of this book was to explain what it was like for the astronauts' wives and their families. Being the wife of an astronaut was very different in the 1950s from how it has been in the past few decades or even how it is today. These wives were normal people who were placed in the public spotlight and were forced to deal with unimaginable pressures.

The lives and interpersonal relationships of these wives are uncovered in a way that looks past the image that was presented to the world and shows the reality that these women had to face. There were many negative and positive aspects of life for the wives and families of the first astronauts, and this book does not leave anything out.

There are many political issues that are covered in The Astronaut Wives Club. Politics played an important role in space exploration back in the 1950s. These astronauts and their families became close friends with many high-ranking political figures, including the president of the United States. Some of these astronauts even became so involved with politics that they wanted to become politicians themselves. Many of the astronauts' wives had strong views when it came to feminism and political issues that dealt with women's rights. During the 1950s, women in America were viewed as being inferior to men, and this book does a great job of illustrating the differences between men and women at the time. The political changes that were taking place in America at the time had a direct effect on the space program, and this book provides some good insight into the correlations between politics and the space race.