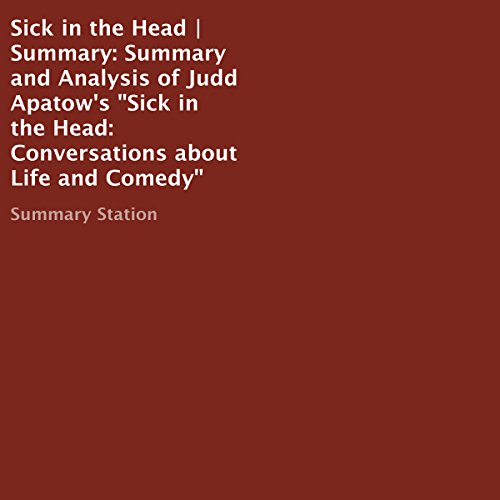 Summary and Analysis of Judd Apatow's 'Sick in the Head: Conversations About Life and Comedy'

By: Summary Station
Narrated by: Scott McFall
Try for $0.00

Judd Apatow, the comedic mastermind behind films like Knocked Up, Funny People, and most recently Trainwreck, starts his book of interviews by telling us why his obsession over comedy never faltered during the course of his life. He grew up watching comedic greats like Steve Martin and George Carlin, and their talent inspired a love affair for comedy that only grew as time went on.

The 1970s especially stuck with Apatow, and performances from Richard Pryor and the Monty Python gang, as well as the classic show Saturday Night Live, cemented Judd's loyalty to comedy and enabled him to decide early on what he wanted to do with his life - he wanted to make people laugh. Negative experiences in his early life also prompted Judd to seek comfort in comedy. He notes quite openly that he was a somewhat angry kid who did not understand life or the world around him very much. His parents divorced and he was a loner in school. In fact, he explains that he truly was picked last for gym class - all the time. He was small and quiet, and this further distanced him from those around him. However, instead of letting this ruin him, he decided he was the "cool" one and everyone else had the problem.

He concentrated on comedy more and more and he knew, without a doubt, that it filled a void in his life while also making him feel less weird and less alone. In the world of comedy, the funny guys were in charge, and Apatow wanted to immerse himself in the comedic circuit permanently.

What listeners say about Summary and Analysis of Judd Apatow's 'Sick in the Head: Conversations About Life and Comedy'

Bought this “summary” while multitasking, mistakenly thinking I Lesson learned. This was not worthy of a purchase. It’s an extended teaser to encourage you to buy the actual book. It shouldn’t cost a credit, which is a rip-off.

A summery as it says