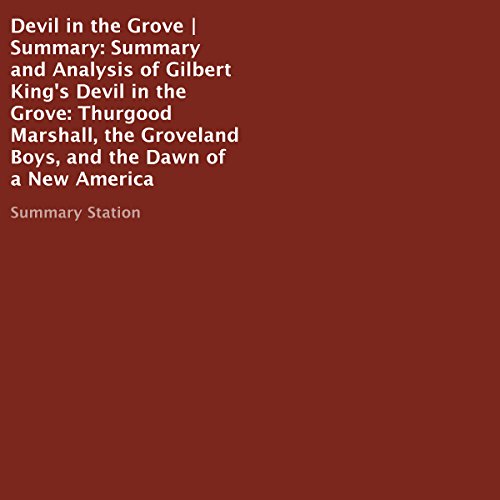 Summary and Analysis of Gilbert King's Devil in the Grove

By: Summary Station
Narrated by: Chris Ingalls
Try for $0.00

Learn About Thurgood Marshall, the NAACP, and Some of the Most Influential Civil Rights Legal Cases in American History in a Fraction of the Time!

Thurgood Marshall rides the train in the Jim Crow car (the one directly behind the engine) to the American South to defend yet another black citizen in court. Marshall, who was the grandson of a mixed-race slave, is an integral part of the growing civil rights movement in America. His father and uncle worked as porters on the railroad, and he himself worked as a waiter in the dining car during college. This history creates a sense of comfort and belonging for him as he travels by train, crisscrossing the country defending equality and civil rights. By now, he has built up an impressive list of legal victories on behalf of, usually falsely accused or framed, black citizens (often in the extremely racist American South).

Although he has been successful, the plight of those whom he was unable to help haunts him as he drifts in and out of sleep on the train. He sees the photos of young black men, lynched by white supremacists, who took matters of "justice" into their own hands. The most disturbing for him, however, is the photo of young white children posing near the corpse of Rubin Stacy as it hangs from a tree, smiling and oblivious to the cruelty of what has just taken place. To Marshall, this photo represents the next generation of white children being brought up to actively hate and discriminate against black people, or at least to be indifferent to their suffering. Here is a preview of what you'll learn: