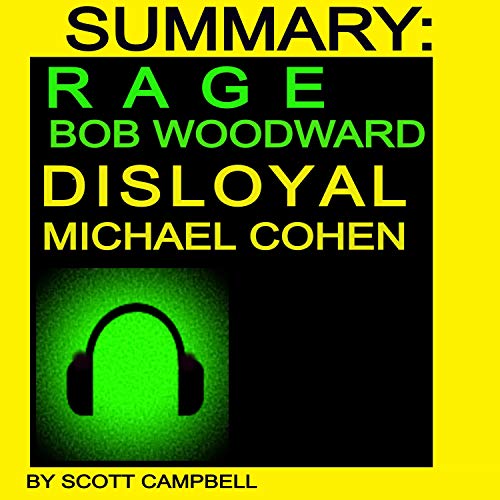 Pouncing on the moment that President Trump became informed in the Oval Office that the Covid-19 pandemic would most likely become the most significant threat to national security during his Presidency, best-selling author Bob Woodward has woven the story and Trump's other challenges into an anti-Trump tirade that sometimes backfires. Woodard gets frustrated often in his interviews with Trump, and sometimes yells at Trump and gets distressed.

Michael Cohen admits he was mesmerized by Trump like a cult member, began to see himself breaking his moral code, but stuck with Trump for money, power, and fame. Cohen boasts that he knew Trump better than his own family and it was not a pretty sight. He saw Trump as a sociopathic mobster boss who would do anything to win and destroy anybody who challenged him in his quest for success.

Cohen dumps a truck load of Trump family skeletons at the listener's feet and then picks them up one by one and executes a meticulous show-and-tell.

He also shows Trump’s uncanny strengths, skills, and abilities and why he thought, originally, that Trump would be a good President. Cohen spent years encouraging him to run.

This is a Best Seller Summary and Analysis by Scott Campbell. It is not the original book.

Important books demand widespread listening and understanding. Disloyal: A Memoir is one of them.

Use this Best Selling Summary and Analysis book to:

Note: This is a summary book for and is not intended to replace or substitute for the original books by Bob Woodward or Michael Cohen in any way for fashion.