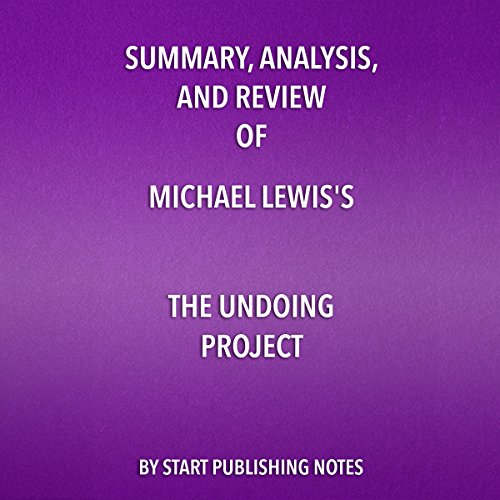 Summary, Analysis, and Review of Michael Lewis's The Undoing Project: A Friendship That Changed Our Minds

Please note: This is a key takeaways and analysis of the book and not the original book.

Start Publishing Notes' Summary, Analysis, and Review of Michael Lewis's The Undoing Project: A Friendship that Changed Our Minds includes a summary of the book, review, analysis and key takeaways, and detailed "about the author" section.

Michael Lewis, the author of the successful book-turned-movie Moneyball, found inspiration for his new book in a review by Richard Thaler and Cass Sunstein. Writing in The New Republic, Thaler and Sunstein argued that the ideas in Moneyball were not original. Rather, Moneyball was a good illustration of ideas that had originated from two Israeli psychologists named Daniel (Danny) Kahenam and Amos Tversky. Lewis had never heard these names before and he was intrigued. Lewis then introduces listeners to our main protagonists, Danny and Amos. First, Lewis discusses Danny Kahenman. Danny had survived World War II, partly by evading concentration camps and moving to Israel had taught him that people were very strange. His interest in psychology was as a means to study philosophy. He wanted to understand the world through understanding the people who lived in it. Why, for example, when there is a regime that has as its goal the extermination of Jews, do some Jewish people recognize the threat and escape, while others remain and die?

What listeners say about Summary, Analysis, and Review of Michael Lewis's The Undoing Project: A Friendship That Changed Our Minds

Having listened, I feel like I've gained enough insight into the book to determine if I actually want to read it.

This is a great story and reinforces the nature of humanity as forever complex and illogical. It’s great to be human. Also, long live collaboration. A Friendship That Changed Our Minds - that's what this book is all about. The friendship of two men. By reading these types of books that explain detailed memories of people’s lives it is way easier and more fun to learn about them and at the same time, this makes the understanding of theories deeper.. very thoughtful ..

Thank you Michael Lewis for making the eternal wisdom of this partnership extremely accessible, memorable and enjoyable to experience.

The audiobook hits most of the key highlights but is lacking the very important point of your friend's style of communication that affects your preferences for communication. Listening to his book a couple times can be very insightful for information to understand your friendship.

The Undoing Project, looks at what friendship means, how it can survive, why we need it, and what we can do to get the most from it. We move through life in packs and friendship circles. Why do some friendships last a lifetime...

The layout of this short summary is simple and easy to refer. A pretty little book. Plenty of ideas were good, the amount that was used in this book was definitely over the top. which I also recommend.

So far so good. I have employed the advice contained in this book over the past couple of weeks and it has improved my relationship with my friends, family and new acquaintances. This book contains common sense about relationships between two Jews that has never been written and organized in this manner.

As you age gracefully through life, things change and so do people. This book is a good reminder on how to maintain or make new friendships.

I got this book to help me with my problems with my best friend. I thought it would be boring but there are valuable chapters and they can make you laugh. It thought me a lot and I have more friends. Its all about Friendship in tough times..