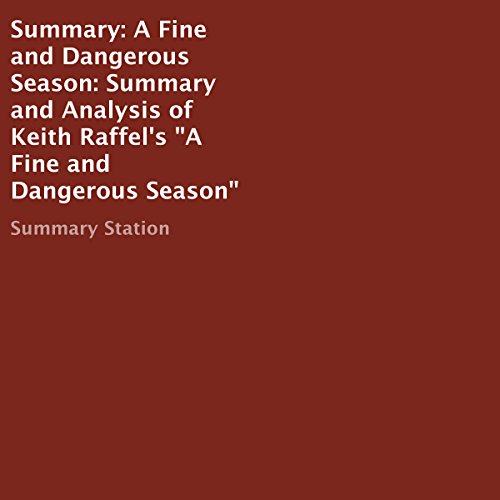 Summary: A Fine and Dangerous Season

By: Summary Station
Narrated by: Trevor Clinger
Try for $0.00

Have you been looking for a new book where you can get the excitement and thrill of a political thriller that brings forward the circumstances of a situation that you may have never considered before? A Fine and Dangerous Season by Keith Raffel actually does an incredibly good job of presenting a story about one of the country’s most beloved presidents, President John F. Kennedy, and a story that really brings the entire feeling and emotion that revolved around that area to life. This particular book explores two of the most volatile periods of time in American history - the decision to participate in World War II, and the Cuban Missile Crisis, which is known for almost starting World War III between the countries of the Soviet Union and the United States.

The first section of this summary will take a look at everything that is related to the history behind the book, which is also explored in detail in the book itself. As you may expect, understanding the history of this time period will make it much easier for you to understand the events that occur during the book. The second section of this summary will take a closer look at the general summary of the book itself (without spoilers, so that you are able to enjoy the book in a way that suits how you wish to enjoy it), and the last section focuses on the characters that are involved throughout the book.

What listeners say about Summary: A Fine and Dangerous Season