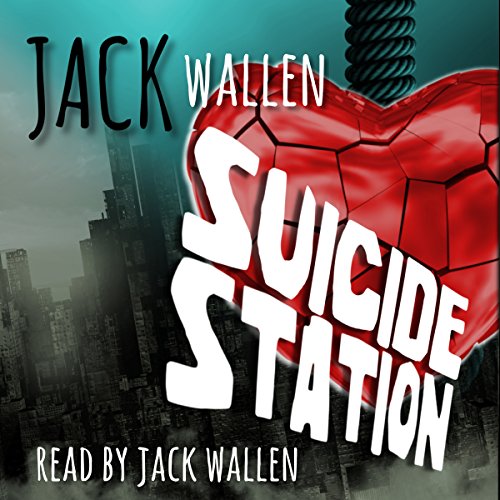 Death is not the end of love.

The world of standup comedy was too much for Foster Donovan. Leaving a note behind for his wife, he wrapped a noose around his neck and changed his life by embracing death. Turns out, the afterlife was nothing like he'd expected. Stations await those who've passed on. Who you were in life determines your "Forever Station".

Those who've taken their own lives will find themselves temporary residents of Suicide Station, where they receive counseling, friendship, and (for Foster) the prospect of love. Candy. The very embodiment of beauty and grace has eyes for our accidental hero. Unfortunately, for Foster, the tether to his old life begs him to return. When he does manage to slip the bonds of death, Foster Donovan discovers a very different punch line.

Suicide Station is a paranormal romance with a twist even the grim reaper wouldn't see coming.

What listeners say about Suicide Station

Unique take on the after life

Would you listen to Suicide Station again? Why?

Yes, and I have a couple of times. It is so good I wanted to share it with family & friends.

What was one of the most memorable moments of Suicide Station?

When Donavan Foster returned from the Convergence. I also loved the interaction with David David.

What an amazing gift, to hear the book and character voices as the Author intended them to be. I rank Mr, Jack Wallen up at the top of the A list for Narration. I have listened to many books he narrated.This is the first time he narrated one of his own books and it was phenomenal.

When Donovan came back and David David was gone and "Game boy", was his new roommate.

Suicide station is not what would expect from the title. It is a book of self-reflection, friendship, and love. The afterlife was not what Foster Donovan a self-proclaimed atheist had expected. It wasn’t what any of the religions said it would be. When you take your own life you go to SS and you carry with you, your broken body a result of how you died for all to see.SS is a weigh station of sorts where you are assisted to overcome your fears and understand the why of taking your life. Once you complete the counseling you move on to your forever station a whole person again.
Suicide station hold a few secrets of its own one being…a rumored is called The Convergence, said to take a Cinder back to the living world. It said if the Cinder is not ready in mind and spirit they are doomed to repeat the actions that brought them to Suicide station in the first place.
There are some very interesting and colorful people in this story Gemma the flamboyant Matradee. David David a well informed and knowledgeable stoner that is Foster's roommate. Then there is the lovely Candy, Foster’s counselor a perfect 40’s pinup girl that embodies all things feminine and every male Cinder’s dream girl.
Ride along with Foster Donovan as he tries to find the truth of his existence as a once popular comedian to the driving fear that caused him to opt out rather than fail. Strange things happen on his journey, Suicide Station is indeed a strange new world.
I was a Beta reader for this delightfully twisted book by the Author Mr.Jack Wallen. What a delightfully stimulating sometimes laugh out loud, funny story. You can't help but root for the well rounded and sometimes excentric characters. What a novel idea that the afterlife be created of specific stations suited for the individual and the way they lived their life. No matter what genera Mr. Wallen writes in, you know the story will be exquisite rich and full and masterfully told story with original ideas that create unique world. He is one of the masters of his trade, the thinking persons Author. None of his books that I have read so far,(I have read many of this Author’s work) has ever been full of clichés or have mundane or boring dialog between the characters.

I didn't know what to expect when I started listening to Fosters story. So I'm not disappointed or think I wasted my time. I'm gald I didn't give up part way through, it ends well enough.

What did you love best about Suicide Station?

With a quirky sense of humor and just enough cheekiness to keep you hanging off the edge of your seat, Jack Wallen kept me entertained for hours as I listened to this tale. I love audiobooks and Jack's take on what happens after we die, and what happens if we cause our own death, was not only imaginative, but thought-provoking. I love that in a story!

Foster, of course, but I did love the guy with Cheetos too. :)

Honestly, I liked them all but there was something about that scene with the Cheetos.

When Foster finds out his wife's reaction.

Thanks for making a great book!

What does Jack Wallen bring to the story that you wouldn’t experience if you just read the book?

I listen to books during my 2+ hours of commuting each day - it was hard to turn it off at the end of the drive and I always looked forward to getting back to the book. Enjoyed it so much I found myself looking for opportunities to listen outside of my daily commute.

I went into this book knowing very little beyond the brief story summary - I was surprised at many points in the direction the story took and laughed out loud numerous times. A good listen.