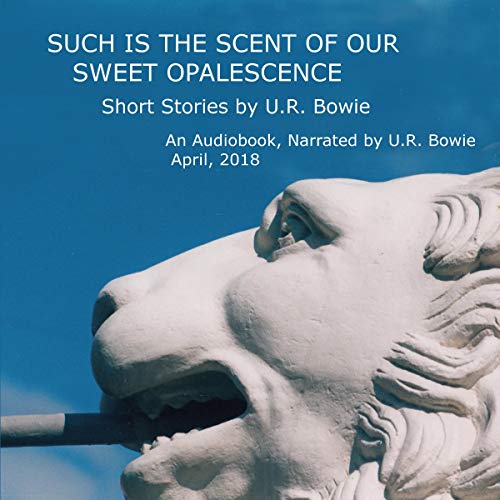 Such Is the Scent of Our Sweet Opalescence

Among other things they feature: (1) a conversation between a 99-year-old man and the Lord God Jehovah; (2) a character who, following the example of Joan of Arc, laughs his way off the earth; (3) a man on Death Row, who tells how they tried to execute him, and failed; (4) a translation from the Russian, the story of how Jesus sins, and repents; (5) the tale of a man hit by lightning, who survives, but comes to regret his survival.

Selected Quotations from the Stories

"One sunny afternoon under clear skies the life of one Uretherer V. Lamb, 63, pataphysician, of Interlachen, Florida, was changed for all time. On July 5, 2015, he was standing beside his '78 Pontiac - pulled off Interstate I-75 at Mile Marker 395 - near the rest stop just north of Gainesville. He was slowly urinating past his benign prostatic hyperplasia when a lightning bolt boomed out of the blue, winged its way earthward, and struck his left shoulder."

" -- So why am I here talking unto you today, Arnold, my child?
-- It ain't for me to say, Lord. Why art Thou?
-- You might could be thinking, Arnold R. Arms, that a visitation from the Hegemon of the Galaxy of the Milky Way presages your imminent demise.
-- Well, Lord, it did actually cross my mind, but then again, I ain't but 99...."

"I heard once there was a inmate in Louisiana and they was executing him and he did not cooperate, he fought, but they finally dragged him down to the electric chair spitting and kicking at them all the way, restrained him, tied his legs down so he could not kick, got him all strapped in, put the helmet on his head, him still yelling, then a hood over his face and turned on the juice, and that man, Willie Jay Somebody, I believe it was in 1946, can you imagine? he stopped yelling and...."