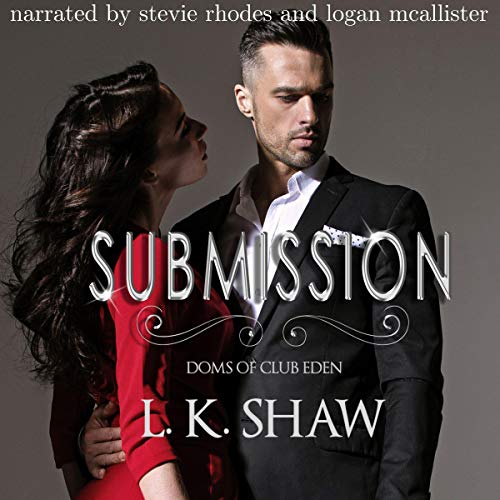 By: LK Shaw
Narrated by: Stevie Rhodes,Logan McAllister
Try for $0.00

The moment I laid eyes on Penny, her innocent, submissive nature called to my dominant side. I immediately volunteered to guide her exploration into my dark and decadent world.

I'm also playing a deadly game of cat and mouse with an obsessed psychopath whose goal is to destroy me. When my worlds threaten to collide, I'm forced to call it quits between us.

Soon I discover I'm too late, and she's caught in the crossfire. Now, I'll do everything in my power to protect the woman I'm falling for.

What listeners say about Submission

I enjoyed this book. The characters were likable, had great chemistry and generated plenty of steam. I thought that this book offered a nice balance of romance and suspense. I liked Penny and Marcus as a couple. Penny was very relatable with her insecurities and curiosity. Marcus was a intense dirty talker that knew what he wanted the moment he saw it and that was Penny. The storyline keeps you focused with drama, danger, bits of humor, passion, emotions and a few twists. This book does feature BDSM, so if that is a hard no for you, this is not the book for you. The secondary characters were interesting and I would very much like to enjoy their story as well. This book offers dual narration, which is always something I appreciate and I enjoyed both of the narrator's performances.

This was so good and very hot with a great storyline.... I can't wait to listen to the rest of this series...... The narration was very good

This was a good listen! I really enjoyed the story and while I wasn't a huge fan of the voices they did a great job!

Logan and Stevie deliver a dynamite performance, bringing L.K. Shaw's first Dom's of Club Eden book to life. I am a huge fan of L.K. and I adored this book, but hearing it in audio gave me a whole new love for it. Logan brings life to Marcus, his smooth voice and husky growls embodying the Dom perfectly. Stevie is great as Penny, providing an innocent, but strong woman background performance. I really hope that there are plans to have more of the Eden books turned into Audio as I would love to hear them come to life too!

This is one of my favorite books to read from this series. Stevie Rhodes and Logan McAllister made the story come alive!!!

Logan McAllister and Stevie Rhodes did an awesome job at bringing these characters to life! Logan's voice is sultry and sweet!

I really enjoyed the story and the narration was really good. I enjoyed seeing Penny grow and Marcus come out of his shell. I was definitely thrown for a twist with Marcus' past. I'd hope I could be as forgiving and understanding as Penny, but I'm not sure I'm as big a person as she is! *I won a promo code for this story and am leaving this review of my own volition because I enjoy the story and want others to listen to it as well!*

I enjoyed every bit of this book, do look forward to reading more loved it

The story ranged from acceptable to poor depending on which part of the story you listened to. There was a lot of story missing that could have made it much better. The sex seemed to be raunchy for no reason. There were cringeworthy moments during the sex, for sure.
The narrators did a great job, but the story was not great, at all.

Submission is an interesting introduction to the Lifestyle, focusing upon respect, support, and boundaries as Penny explores the scene she wants to learn more about. I liked the fact that Penny was led into the Lifestyle by her own curiosity, not coerced or targeted by a Dom as is common in much D/s erotica. Everything was open, consensual, and safe which is great to see in this type of novella.

Despite being under five hours long, this audiobook certainly packed a lot in. It did a good job of introducing the world and setting up the regular players at Eden without becoming too distracted from the main story. Whilst it remained centred around Penny's relationship with Marcus, it successfully introduced another potential pairing and a bachelor Dom who I hope will feature in future books.

As is common in much contemporary romance, everything is exaggerated. Penny is the most beautiful woman Marcus has ever seen, he's more handsome than anyone she's ever known, every touch and kiss is a thousand times better than any previous experience, and all their defences against love melt away in an instant. Penny's reaction to the 'twist' at the safe house exemplified this saccharin indulgence, and skipped rather lightly over the conflict and negativity one might expect. It can be difficult to balance fantasy and reality in erotica, but this story took the romantic rose-tint a bit far and I think it detracted from the tension that was meant to be building from the looming threat presented by Evan.

That said, I was glad that Evan's harassment did not overwhelm the story. Past experience means that I am generally not keen on stalkery plot-lines, so whilst I think some listeners may not feel that Evan was central enough to make this a thriller, I was pleased that whenever my pulse quickened, it was not through fear.

Susmission was narrated by Stevie Rhodes and Logan McAllister, who took turns with alternate chapters in a dual narrative style.

This was my first time listening to an audiobook read by McAllister, despite having been aware of his popularity in romance-listener circles for a while, and I would have gladly listened to him narrate the whole book. The production is slightly better on his early chapters, too, with that echoey/staticy sound in the silences at the beginning and end of Rhodes' chapters for her first few turns. He was a great choice for Marcus, and I'll look out for other audiobooks he has narrated in future.

I enjoyed Rhodes' reading too, but her performance felt like it was slightly outshone by McAllister's. She delivered Penny's hesitancy and innate submissiveness well, which contrasted nicely against Marcus' Dominant confidence. Hard 's' sounds mean Rhodes' voice does not have the smooth, rounded tone of McAllisters, and can be a little harsh.

Overall this audiobook was an entertaining romance with a hint of suspense bubbling under the surface and threatening their HEA. It also offered good insight into the Lifestyle and the people who live it. I'd recommend this novella to listeners who are looking for a short, sweet, steamy audiobook about a respectful D/s relationship.

*I received this audiobook free of charge in exchange for an honest, unbiased review.