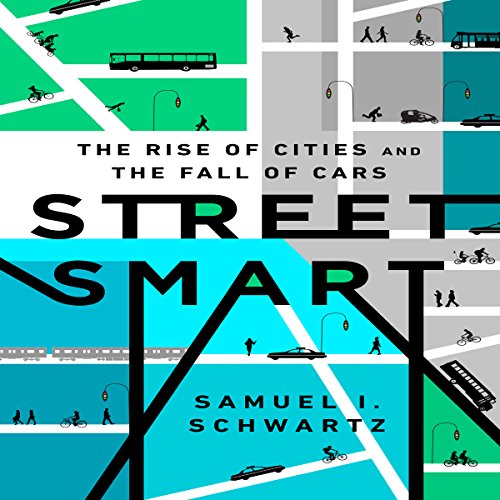 By: Samuel I. Schwartz,William Rosen - contributor
Narrated by: Don Hagen
Try for $0.00

With wit and sharp insight, former Traffic Commissioner of New York City Sam Schwartz, a.k.a. "Gridlock Sam", one of the most respected transportation engineers in the world and consummate insider in NYC political circles, uncovers how American cities became so beholden to cars. He also explains why the current shift away from that trend will forever alter America's urban landscapes, marking nothing short of a revolution in how we get from place to place.

When Sam Schwartz was growing up in Bensonhurst, Brooklyn, his block belonged to his community: the kids who played punchball and stickball and their parents, who'd regularly walked to the local businesses at which they also worked. He didn't realize it then, but Bensonhurst was already more like a museum of a long-forgotten way-of-life than a picture of America's future. Public transit traveled over and under city streets - New York's first subway line opened in 1904 - but the streets themselves had been conquered by the internal combustion engine.

America's dependency on the automobile began with the 1908 introduction of Henry Ford's car-for-everyone, the Model T. The "battle for right-of-way" in the 1920s saw the demise of streetcars and transformed America's streets from a multiuse resource for socializing, commerce, and public mobility into exclusive arteries for private automobiles. The subsequent destruction of urban transit systems and the post-World War II suburbanization of America, enabled by the Interstate Highway System and the GI Bill, forever changed the way Americans commuted.

But today, for the first time in history, and after a hundred years of steady increase, driving is in decline. Younger Americans increasingly prefer active transportation choices like walking or cycling and taking public transit, ride-shares, or taxis. This isn't a consequence of higher gas prices, or even the economic downturn, but rather a collective decision to be a lot less dependent on cars.

What listeners say about Street Smart

Interesting trip through time regarding how people get to the places they need or want to go. You hear about the self-interested and misguided ways people and companies fostered dependence on cars. Great observations about how decreased dependence on cars improves quality of life - not to mention, it's better for the environment. Narration was very good, too.

A book for those that already dislike cars

This book testifies to the already converted; to those that have already abandoned their car completely, or close to it. The odd story is interesting, but there is nothing ground breaking, nothing revelatory, nothing that will make you remember the contents of the book months after you have read it, and perhaps not even days after.

If you are a serious, die hard, urban affairs/studies lover, then you will probably like this book, because you probably like anything city related. For everyone else, my opinion on the book is a solid "meh".

loved the whole thing. this is a very accessible and poignant insight into some extremely important issues. Highly recommended to both people who are already interested and those who could care less about city and transportation planning.

Superb book for anyone interested in transport and livable cities

Samuel does a great job of providing enough accurate information, spun into a highly readable and engaging story, to provide a great base for understanding the way in which roads affect city life. He illustrates using great examples and great analysis and critical opinions. It even is humorous at times!
Performance is great and suitable, and no problem listening to this for hours at a time.

Amazing book for transit/transportation nerds. Just enough first-person anecdotes to make it relatable, without becoming am autobiography. Great narration as well; by the end of the book I felt like I knew the author intimately!

Informative, must read for pols.

It is another angle in considering our transportation system, holistic instead of just walking and biking, which are my primary interests. Mr. Schwartz is quick to toot his own horn, but otherwise a great book. Easy to read.

In a quest to learn more about walkable urban design, I decided to read (listen) to this book, after I read Jeff Speck's book "The Walkable City". It served as a great follow-up and built off many of the "Walkable City" principles quite well. The narrator reads very slow however. I set the narration speed up to x1.5 and it improved my overall listening experience substantially.

Really compelling nonfiction about why cities are the that they are and what they can do to improve multi-modality. Plenty funny little quips to keep you entertained, and the narrator was great!