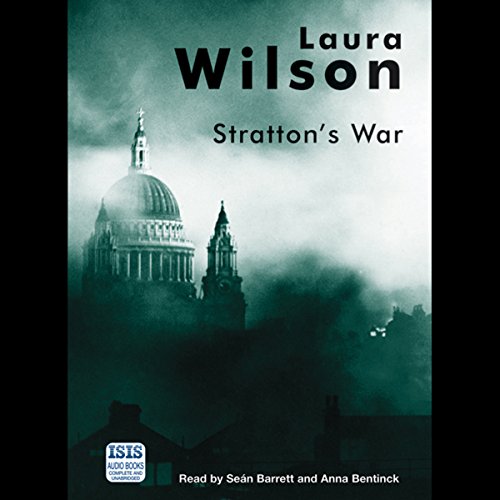 By: Laura Wilson
Narrated by: Sean Barrett,Anna Bentinck
Free with a 30-day trial

London, June 1940. When the body of silent screen star Mabel Morgan is found impaled on railings, the coroner rules her death as suicide, but DI Ted Stratton of CID is not convinced.

As he starts asking questions, it becomes clear that Morgan's fatal fall may have been the work of one of Soho's most notorious gangsters. When Stratton's path crosses with MI5 agent Diana Calthrop, they uncover a criminal network and a secretive pro-Fascist organisation.

It soon becomes clear that the intrigues of the Secret Service are alarmingly similar to the machinations of war-torn London's underworld.

"A compelling and wonderfully atmospheric murder mystery deftly woven into Blitz-era London." (Robert Goddard)
"Wilson's seventh novel is atmospheric and exciting." (Observer)
"A gritty work of imagination that has the ache and authenticity of the real thing." (Literary Review)

What listeners say about Stratton's War

From doodle bugs and MI5 to Teddy Boys, Billy Graham and the bomb - it's all there in the background of this series.

I finished the four in the series to date. Each gets stronger as novel, though the central crime involved may make one more interesting than another to you. The novels can be read as stand alones, each with enough backstory but not too repetitive in that respect, as some series can be.

There are good WW2 (and then 1950s) setting details, comparable to WWI Maise Dobbs series, except Stratton is an ordinary detective inspector, with very ordinary human failings --kind of a Rebus in a historical setting, though Wilson doesn't approach the inventiveness of an Ian Rankin ( but then either did Rankin in his first half dozen novels). Good dialogue.

These are not edge-of-seat thrillers, but there is some gristle - though never for shock value (# 3 had the most detail of corpses and post-mortems). There are a few but spare R rated words. Sex is obliquely handled, with nothing explicit, but there are some adult themes, adding to the realism. LG issues are treated sympathetically, but in character for the time.

This probably won't be a long drawn out series: The first is set in 1940; second jumps to 1944; then 1953 and 1956, respectively -- all rich with the gritty daily grind in WW2 and aftermath London, something we North Americans need to be aware of to understand Britain.

Narrator Sean Barrett is a this very best as Stratton and handles all the characters well.

A surprising gem of a story

I Really did like this book, the narration moves from the male to the female character with elegance and the story is believable with each character well set for his station and time and I must add, intelligent. Even the ending was realistic. So many stories forget there provenance by trying to end with a big boom! And some of the best just don’t. They end when the story is over. Well done, I will be looking for this author again!

This crime novel is set in London at the beginning of the second World War. The story is told from the point of view of two people, an experienced police inspector and a young woman just recruited into M I 5. The plot is complex and the story is tightly plotted, author Laura Wilson does a fine job of recreating the feel of the capital, as it comes to terms with the imminent German bombing campaign. You get a real sense of how the gritty residents of London coped during the blitz. However the book does have a few small issues, many fine young women were recruited into the security services at this time and history shows us what a crucial role they played. From code breaking to risking their lives in France as part of the Special Operations Executive. My issue is that the main female character is so naive and gullible, would such a weak character have been recruited ?. I believe the author does a disservice to the brave young women who served with such distinction. That said, this story of murder, politics and national security is a fine book and may well work better when read as a paperback or as an ebook.
As an audiobook it has a problem, the use of two narrators. Both Sean Barrett and Anna Bentinck are first class narrators, but in this case two narrators makes the story feel somewhat disjointed. I felt the book worked much better when the two stories merged and the voice of Sean Barrett was used more frequently.
Having voiced my small issues with this novel, I did enjoy it and I have already purchased the second book in the series.

I am very impressed with this author; my first book by her. I enjoyed all aspects of the story and particularly enjoyed the setting. Realy first class !

Start of a long series?

Laura Wilson's website indicates that Ted Stratton is going to be around for some time. I for one am very pleased about that as I found this book and the follow up 'An Empty Death'very absorbing. Unfortunately I read them the wrong way round!

But can recommend them as a jolly good read, (to use a term from the era!)

Good atmosphere, nice character build ups but a few too many clich?s.

I only found this book as I was looking for anything narrated by Sean Barrett that was part of a series and this ticked all the boxes. The story is pretty good though probably the weakest in the series. I didn't like the extra narration for the chapters featuring the lead female character though that is a personal preferences rather than a slight on the actual narration. I decided to stick with it and I'm glad i did. Book 2 is excellent and narrated by Sean alone, as is book 3!

Contemporary themes in an historical setting

A tidy detective novel with a couple of interesting twists - the first being its setting in second world war London with an insight into their way of life and the second being that there are two overlapping stories, told from two perspectives and narrated by two narrators (male and female). The plots are involving and it kept me fully entertained throughout.

Excellent listen. I was not sure about the two narrators (I've had this before and hated it) but it really works on this listen. Readers are excellent, story is great - highly recommend this as a listen.

Once again Det Stratton is fantastic in this book. I was uncertain at first about having 2 readers but it realy added to the listening pleasure.

I do hope there will be a third book. Read these out of order but did not effect the storyline in anyway

This book was much more about the lives, thoughts, feelings, of the two main characters than the investigation of the murder. The murder element was somewhat incidental! Performances were great though.