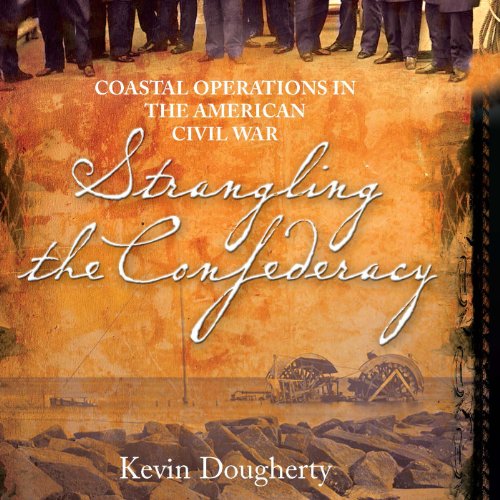 By: Kevin Dougherty
Narrated by: Danny Campbell
Try for $0.00

A selection of the Military Book Club

While the Civil War is mainly remembered for its epic battles between the Northern and Southern armies, the Union was simultaneously waging another campaign - dubbed "Anaconda" - that was gradually depriving the South of industry and commerce, thus rendering the exploits of its field armies moot. When an independent Dixie finally met the dustbin of history, it was the North's coastal campaign, as much as the achievements of its main forces, that was primarily responsible.

Strangling the Confederacy examines the various naval actions and land incursions the Union waged from Virginia down the Atlantic Coast and through the Gulf of Mexico to methodically close down every Confederate port that could bring in weapons or supplies. The Rebels responded with fast ships - blockade runners - that tried to evade the Yankee fleets, while at the same time constructing formidable fortifications that could protect the ports themselves. While Union troopships floated offshore, able to strike anywhere, mobile Confederate forces were kept at hand near crucial points, albeit in smaller numbers, to resist Federal irruptions into their homeland.

In the final analysis, the Union's Navy Board, a unique institution at the time, undertook the correct strategy. Its original decision to focus on 10 seaports that had rail or water connections with the Confederate interior - from Norfolk to Charleston to Mobile to New Orleans - shows that the Navy Board understood the concept of decisive points. In a number of battles the Federals were able to leverage their superior technology, including steam power and rifled artillery, in a way that made the Confederate coastal defenses highly vulnerable, if not obsolete. On the other hand, when the Federals encountered Confederate resistance at close quarters they often experienced difficulties, as in the failures at Fort Fisher, the debacle at Battery Wagner, the Battle of Olustee, and in other clashes.What makes this book particularly unique is its use of modern military doctrine to assess and analyze the campaigns. Kevin Dougherty, an accomplished historian and former career Army officer, concludes that, without knowing it, the Navy Board did an excellent job at following modern strategic doctrine. While the multitude of small battles that flared along the Rebel coast throughout the Civil War have heretofore not been as well known as the more titanic inland battles, in a cumulative sense, Anaconda - the most prolonged of the Union campaigns - spelled doom for the Confederacy.

What listeners say about Strangling the Confederacy