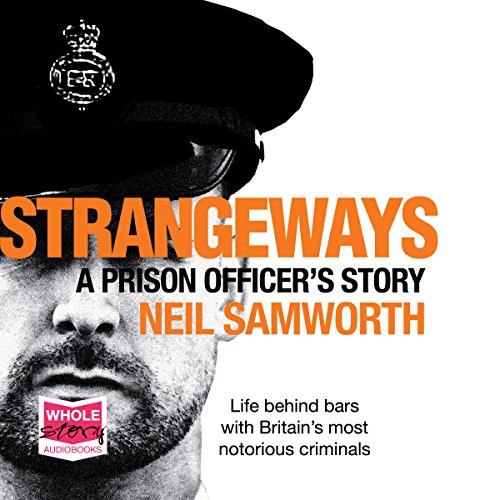 A jaw-dropping account of life as a prison officer in one of the country's most notorious jails.

Neil ‘Sam’ Samworth spent 11 years working as a prison officer in HMP Manchester, aka Strangeways. A tough Yorkshireman with a soft heart, Sam had to deal with it all - gangsters and gangbangers, terrorists and psychopaths, addicts and the mentally ill. Men who should not be locked up and men who should never be let out.

Strangeways is a shocking and at times darkly funny account of life in a high-security prison. Sam tackles cell fires and self-harmers and goes head to head with some of the most dangerous men in the country. He averts a Christmas Day riot after turkey is taken off the menu and replaced by fish curry and stands up to officers who abuse their position. He describes being attacked by prisoners and reveals the problems caused by radicalisation and the drugs flooding our prisons.

As staffing cuts saw Britain’s prison system descend into crisis, the stress of the job - the suicides, the inhumanity of the system and one assault too many - left Sam suffering from PTSD. This raw, searingly honest memoir is a testament to the men and women of the prison service and the incredibly difficult job we ask them to do.

The Honest and Brutal Truth. Loved It...

I enjoyed this book so much I have to give it a 10 out of 10.
As a person who previously only had the black and white picture of prison life as given in the official line and dodgy press coverage, this book opened my eyes and heart to the full colour picture of the pressures and dangers that prison staff have to deal with every day while feeling undervalued.
The content was so well balanced, brutal, heart breaking and so honest that it hurt some times, but then it also made me smile a lot too. I am dismayed, distressed and angered at some of the revelations within this book. The story that unfolded was real, sharp and at times also heartwarming. All my emotions were heightened. I will be listening to it again, and recommending it to all.
I would like to thank Neil Samworth for his honesty, bravery, and for writing such a valuable piece of work...

Good read brought back many memories both happy and sad of my time as an OSG at Manchester prison and later as a member of the I MB at Forest Bank
The writer displays a compassionate, firm and fairDescription of his past vocation

First & foremost I really hope writing this book helped Sam on his road to recovery. Secondly it's a very honest book & I really liked Sam & felt that he was being really open & straightforward. It was interesting to see how prisons work although I'm sure now as Sam says that things are a lot worse. As usual, the workers on the shop floor are never recognised for the incredible things they do & are made scapegoats at every opportunity.When things hit rock bottom someone will have to do something about it, just a shame it has to come to this.

Often biographies, while interesting are the story of horrible unliveable people...Samworth speaks from the heart & says it like it is.

An informative insight into prison culture. Whether you sympathise or empathise with the characters is up to you and your politics.
Are prisons tough enough on offenders or are they too soft and easy going on inmates. Is punishment properly dealt with from a crime victim's point of view. I learned a lot from this book. I'll say no more.

A riveting account of life as a prison officer. well written and well read, with occasional touches of humour in what is very gritty story. It has enlightened me on the prison service. Being a wimp, I found the section on prisoners who self-harm a bit difficult, but it is important to hear it.

I found suggestions on how to improve the prison service particularly interesting. it was also nice to hear the author's actual voice at the beginning and at the end of the book.

Required reading in my opinion

Great book, harrowing,hilarious, brutal and honest. Let’s hope the powers that be listen to the sensible common sense suggestions put forward by someone who has lived and suffered their incompetence for years and not sat in an ivory tower.

This book was ok. If you’ve worked in a prison don’t bother as it’s the same old jail stories. But if you haven’t, you’ll be hooked & horrified.
Johnathon keeble was probably the best voice actor I’ve heard to date on audible though. Worth the purchase for that performance alone!

This is real. The total reverse of what the media tell us about prison. Very well narrated.

simply captivating from start to finish.

a must read!
I listened to it on audible and found the recount to be well read and interesting.
I would reccomend anyone who like biographies or true crime to add this to their must read list

very gritty and raw, Horrific in parts but an overall great listen held my attention from start to finish.