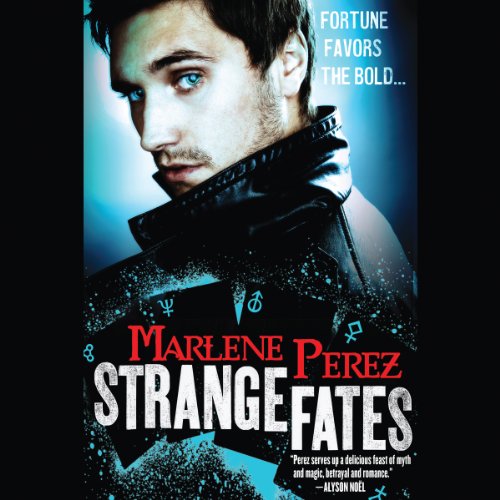 By: Marlene Perez
Narrated by: Jeremy Arthur
Try for $0.00

Brooding, leather jacket-wearing Nyx Fortuna looks like a 20-something, and has for centuries now. As the son of the forgotten fourth Fate, Lady Fortuna, he has been hunted his entire life by the three Sisters of Fate that murdered his mother.

Fed up and out for revenge, Nyx comes to Minneapolis following a tip that his aunts have set up a business there. His goal - to bring down his mother's killers and retrieve the thread of fate that has trapped him in the body of a 20-year-old unable to age or die.

But when a chance meeting with the mysterious, dangerous and very mortal Elizabeth Abernathy throws off his plans, he must reconcile his humanity and his immortality.

"Perez serves up a delicious feast of myth and magic, betrayal and romance, in a mystical version of Minneapolis where nothing is quite what it seems. Skillfully rendered in crisp, edgy prose, Strange Fates offers an exciting start to what's sure to be a winning new series. I can't wait to follow the sexy-as-heck Nyx Fortuna into the next installment!" (Alyson Noël, number one New York Times best-selling author of The Immortals series, The Riley Bloom series, and The Soul Seekers series)

What listeners say about Strange Fates

Over all it was an ok lesion with the exception being Nyx is one of the most annoying characters I've seen in a while. For the most part he was decent except he makes some out ragingly bad decisions especially for being how old he's suppose to be. I don't wont to give out any thing but Nyx would have been a whole lot more believable if some one who's over 200 would have a shred of common sense. I might pick up next book in hopes things get better.