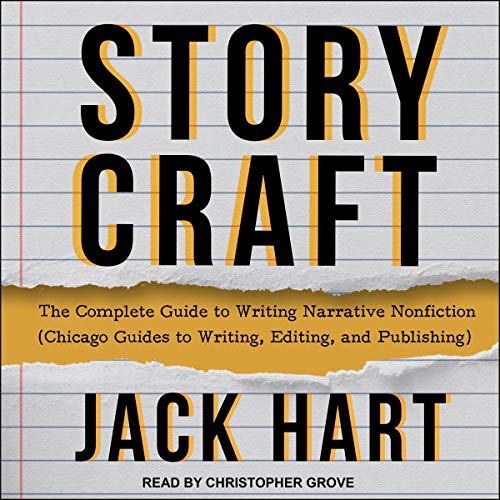 By: Jack Hart
Narrated by: Christopher Grove
Try for $0.00

From the work of the New Journalists in the 1960s, to the New Yorker essays of John McPhee, Susan Orlean, Atul Gawande, and a host of others, to narratives such as Mary Roach's Stiff, narrative nonfiction has come into its own. Yet writers looking for guidance on reporting and writing true stories have had few places to turn for advice. Now in Storycraft, Jack Hart, a former managing editor of the Oregonian who guided several Pulitzer Prize-winning narratives to publication, delivers what will certainly become the definitive guide to the methods and mechanics of crafting narrative nonfiction.

Hart covers what writers in this genre need to know, from understanding story theory and structure, to mastering point of view and such basic elements as scene, action, and character, to drafting, revising, and editing work for publication. Revealing the stories behind the stories, Hart brings listeners into the process of developing nonfiction narratives by sharing tips, anecdotes, and recommendations he forged during his decades-long career in journalism. From there, he expands the discussion to other well-known writers to show the broad range of texts, styles, genres, and media to which his advice applies.

What listeners say about Storycraft

Christopher Grove must be Computer Generated

The content is interesting but who is Christopher Grove? Methinks a Computer Generated voice that will put anyone to sleep. Talk about monotonous. I ordered the book for the content so if I can stay awake through the sound of a drone, I might learn something. But really. Christopher Grove? Come on, just say Computer Generated instead of coming up with an alias for Alexa's boring half cousin twice removed.

Really the best book I have read about non-fiction entertaining and full of facts and explanation.

The author struggles to go 2 sentences without reminding you of his experience in the field and will often make a statement about good writing and then do the opposite within the page. Broadly speaking, it is good advice but it is presented in a way that makes me desperatly not want to follow it.

The reader is also a really bad match for this book. While I don't doubt that he has done good work, the combination of his voice and the material makes it even less pleasent.

One of my new favorite storytelling books!

One of the best storytelling books I’ve listened to. I think it’ll stick out the most. Perfect for those interested in how to tell great (and honest) non fiction. Perfect for historians looking to write and capture. Perfect for script writers looking to tell true stories. The middle of the book might feel slow with explanations of voice and perspective. But worth it to the end. At first the narrator seemed too plain, but I grew into it quickly. I’m gonna take this book to heart.

I greatly enjoyed this book

I don't know how I bought this book, I usually don't buy random content. To my surprise, I really enjoyed learning about a subject that I have no interest in - writing nonfiction (I know, somehow I misread the title). However, the book is so well written and narrated that I could not stop listening to it until the end. Besides, it doesn't matter what you are writing - fiction or nonfiction - the principles of a good story apply to both. Thank you, Jack, for sharing your experience.

Neither informative or entertaining

nothing to learn and nothing to entertain
what is the point of this story?