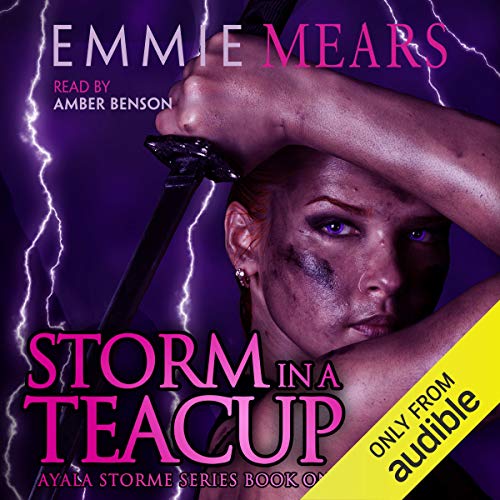 Storm in a Teacup

By: Emmie Mears
Narrated by: Amber Benson
Try for $0.00

Mediator Ayala Storme kills demons by night and handles PR by day. She avoids Mediator luncheons and a fellow Mediator who’s been trying to get in her pants for years. She does her job. She keeps her sword clean and her body count high.

But when a rash of disappearances leads her to discover that Nashville’s hellkin are spawning a new race of monster on human hosts, Ayala will be the first line of defense against these day-walking killers. That is until one of them saves her life. Dodging the Mediators and the demons alike, Ayala’s new knowledge of the hybrids’ free will challenges everything she’s ever known about her job. Racing the clock and trying to outrun her comrades and enemies alike, she’s not sure who will catch her first....

What listeners say about Storm in a Teacup

Would you listen to Storm in a Teacup again? Why?

I liked the fact that the romance part only gets introduced halfway into the story. Where the character doesn't gush and gush on every other page on how hot hot hot the guy is. For the first half, the author really took time to build the world and the situation that Ayala is in. We really get to know what type of person she really is and how despite her shortcomings, she's still a decent person. In my opinion, this just made the romantic parts more endearing and sweet.

I've listened to another of Amber Benson's performance "Zeroes." Thus, I think she's done a great job yet again. I love how versatile her performance is depending on the character.

This is a book for fans of the paranormal fantasy genre who like romance but aren't too keen on reading or hearing about explicit sex scenes.
I like how (in my opinion) Ayala and Mason's first meeting is definitely not the instant attraction type. And I think I like the progression of their relationship from hostility (mostly on Ayala's part) to friendship to lovers.

I really liked this story, it was a great urban fantasy read! The world is rich and well thought out and Ayala is a strong character with a highly ingrained moral code. The plot is fun and fast-paced with interesting supporting characters and many twists.

Unfortunately, I thought Amber Benson's narration was inconsistent at best. She does a fine job with Ayala, but many supporting characters are given horrible cartoonish voices that are distracting and make them sound flat and one-dimensional. Her rendition of Hazel, Ben and Grifflet in particular are grating and annoying. I can't imagine an actual person ever sounding like that! Maybe it was poor direction.

Amber is a respected actress and I've enjoyed her other work, but when you compare this narration to others in her weight class I feel that Amber comes up short. Lorelei King, Anna Fields, Scott Brick and most particularly Amber's Buffy co-star James Marsters all are able to do more with characters and nuance than she shows in this book.

I'll be getting the rest of the series in print.

This story was unique and, after a slow start for the first half, finally picked up and got more interesting and complex. My biggest issue was with the narration. All but the main character sounded like cartoon voices; it was distracting and detracted from the story a lot. :(

Why didn't I read the reviews and save the credit?

I would not recommend because the story seemed to be about word count. I need 200,000 words dang it! I go back and talk about the balance between demons and mediators, over and over and over

Has Storm in a Teacup turned you off from other books in this genre?

Would you be willing to try another one of Amber Benson’s performances?

Never, maybe this book was early in her career. I would say the narration ruined the book but that is only partially true.

Maybe if it was on cable and only football was on, nah, I read a book.

I do not recommend this book in audible form. Amber Benson did a very poor job with the narration. The main character came off as sarcastic and unlikeable due to the narration. supporting character voices were whiny and grating. At times Ms Benson just seemed bored. It is a shame because the story seemed interesting but I could not finish due to the unpleasant narration. I will not listen again to any book narrated by Amber Benson.

Too Slow and Repetitive

I only made it half way through the first half before getting tired of hearing about Ms. Storm's Ivory silk robe (mentioned at least three times) her violet eyes( I lost count ), her deceased or not mother ( also lost count). Move on with the story and don't beat the reader/listener over the head with details. Most of us are really pretty bright. We only need to hear a piece of the story once and we get it.

I enjoyed the story overall. Not a fan of the entire book being written/read in the first person present tense. It just feels uncomfortable..

What was one of the most memorable moments of Storm in a Teacup?

The scene in the clearing when the demons gathered for the birth ritual was pretty memorable.

Her voices for anyone but the main character were grating and cartoonish.

I had fairly low expectations coming into this book, a combination of the exotic name, the purple eyes and the special warrior status reminded me very strongly of a certain kind of fan-fiction (where the main character would turn out to be Snape's daughter and Harry's one true love).

I'm so glad I decided to read this anyway based on another of the reviews because I could not have been further from the truth. Ayala is part of a collective of people who have exactly her attributes and her only real distinguishing feature is being slightly more obsessive than them. She is flawed, she makes snap judgements and mistakes which ultimately makes her much more interesting.

The world building here reminded me a lot of the Hollows series by Kim Harrison and Ayala as a character shares some of the traits of a lot of urban fantasy heroes but despite all this I found some nicely original ideas and a lot of moments of humour and genuine humanity.

This series is really worth a read if you're into urban fantasy leveled with a certain amount of humour.

Rough start, but I ended up a fan

Having seen Storm in a Teacup on Amazon and Goodreads several times, and being familiar with Amber Benson (narrator) from Buffy the Vampire Slayer, I decided to review the series for Audible Studios. While I had something of a rough start with the series, I’m glad I stuck with it.

Two things contributed to the rough start. First, the world-building didn’t go fast enough for me. I struggled to understand what Mediators were, what the Summit was, whether or not Ayala’s boss knew she had a second “job,” that nighttime hours were normal for Mediators, etc. World-building is important to me so I wanted to know more up front. I know plenty of people who would argue against me on this point, so I know it’s a subjective thing.

Second, the voice Benson chose to use for Ayala didn’t work for me at first. I’m not sure if the voice was an attempt at a Southern drawl or an attempt to portray a hard-ass attitude — both of which would be very true to the character, don’t get me wrong on that point; the voice was appropriate. But it was fatiguing to me as a listener.

These two things kept me from really getting into the story at first. But then the character Mason was introduced, and my interest level picked up. Mason brought the conflict to a personal level and let us see through Ayala’s “armor” a little.

By the time I was done listening to Book 1, I was used to Ayala’s “voice” and I was looking forward to Book 2, so I would call that a success. I’m eager to see where this series goes next.

**NOTE: At the time of publishing I have now listened to Books 2 and 3 and am hooked on this series!

Copy provided by Audible Studios in exchange for an honest review. Review courtesy of onebooktwo | one book, two reviews.

The story had some holes but was over all a great read. The performance could have been better. She was not able to do more than a couple different voices so the dialog could have been stronger. The main character is a strong female lead that is easy to root for with witty one liners.

Sorry, I only lasted 2 hours and 33 minutes of a 10 book.
I just didn't take to this world of Mediators, demons, Imps etc. The book is based around Mediator Ayala Storme who has lilac eyes as do all Mediators, She kills demons, etc at night and holds down a daytime job as well.
By the time I stopped listening Ayala is getting involved with hybrid demons who can live in daylight. I feel with in half an hour the book should have grabbed me or if the written world I would need to feel interested in reading the second chapter. 2 hours and 33 minutes in was more than a far chance.
I found the narrator was very monotone. There was very little voice development between the characters.
I won't bother to finish the book what more need I say.

As ever Amber Benson's narration was flawless, sadly, I couldn't say the same about the book/story.
It was slow, repetitive and generally poorly put together. It didn't flow and felt very strained. The characters were dull, uninspiring and almost impossible to engage with. The book was so bland it bordered on painful. This is the first book I've not been able to complete in a long, long time.

Batten down the hatches...a Storme is coming!

If you could sum up Storm in a Teacup in three words, what would they be?

I loved Mason - what a pure spirit.

What an incredible 1st introduction to this very talented author. I love urban fantasy but find I don't get time to read these days. A fan Amber Benson's work - I figured that shes chosen to narrate this series for very good reason. I was not disappointed. My very long commute home from work was like disappearing into another world. I was completely entranced. I rushed home to buy the next one. I can't wait to start!