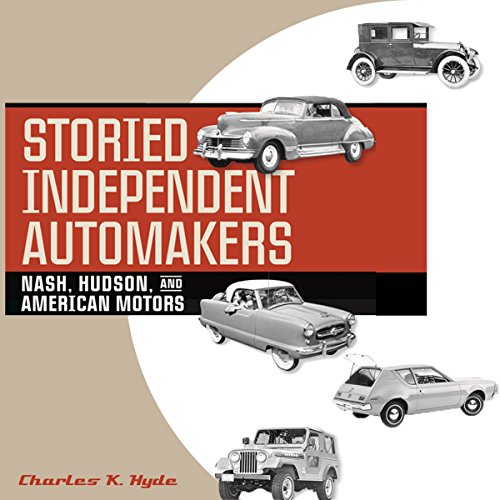 By: Charles K. Hyde
Narrated by: Mike McCartney
Try for $0.00

With roots extending back to the first decade of the twentieth century, Nash Motor Company and the Hudson Motor Car Company managed to compete and even prosper as independent producers until they merged in 1954 to form the American Motors Company, which itself remained independent until it was bought in 1987 by the Chrysler Corporation. In Storied Independent Automakers, renowned automotive scholar Charles K. Hyde argues that these companies, while so far neglected by auto history scholars, made notable contributions to automotive engineering and styling and were an important part of the American automobile industry.

Hyde investigates how the relatively small corporations struggled in a postwar marketplace increasingly dominated by the giant firms of Ford, General Motors, and Chrysler, which benefited from economies of scale in styling, engineering, tooling, marketing, and sales. He examines the innovations that kept the independents' products distinctive from those of the Big Three and allowed them to survive and sometimes prosper against their larger competitors. Finally, Hyde analyzes the ultimate failure of the American Motors Company and the legacy it left for carmakers and consumers today.

Detailed and well researched, but dry.

Very detailed with lots of information, but very dry.
Recommended For serious fans of the history of the U.S. auto industry only.

Genius work, Mr. Hyde. Love your books. Great performance, as well, by the reader. Wouldn't listen to anything else until I was finished

Ear candy for the auto enthusiast!

This book filled in a lot of information unavailable in other automotive histories. I especially liked all the information on the history of the Jeep plant. It was also a pleasure to get to histories on men whose names are mentioned in other books in a passing manor.

lots of good information for auto historians or those interested in independent American automakers. the reader and story are pretty monotone and can be a bit hard to get through at times presenting just facts without much of an actual story or theme based up on it.

if you can get through it I think you will enjoy it at the end however it may be a bit tough to get through at times .

The narrator is a bit dry but I really enjoyed the book. It is very detailed, but it kept me interested the entire time.