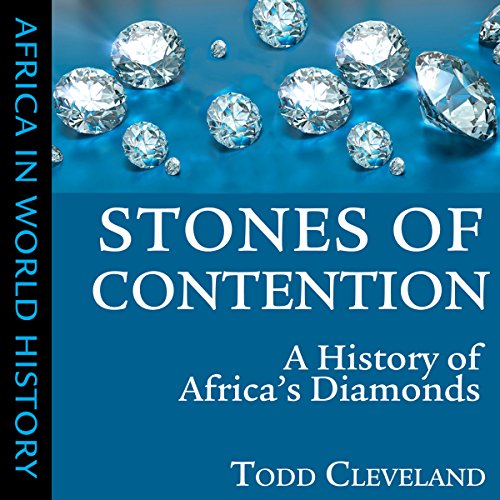 By: Todd Cleveland
Narrated by: Caleb Rector
Try for $0.00

Africa supplies the majority of the world's diamonds, yet consumers generally know little about the origins and history of these precious stones beyond sensationalized media accounts of so-called blood diamonds.

Stones of Contention explores the major developments in the remarkable history of Africa's diamonds, from the first stirrings of international interest in the continent's mineral wealth in the first millennium A.D. to the present day. In the European colonial period, the discovery of diamonds in South Africa ushered in an era of unprecedented greed during which monopolistic enterprises exploited both the mineral resources and the indigenous workforce. In the aftermath of World War II, the governments of newly independent African states, both democratic and despotic, joined industry giant De Beers and other corporations to oversee and profit from mining activity on the continent.

The book also considers the experiences of a wide array of Africans - from informal artisanal miners, company mineworkers, and indigenous authorities to armed rebels, mining executives, and premiers of mineral-rich states - and their relationships to the stones that have the power to bring both wealth and misery.

"Cleveland's vivid and concise prose brings to life the tragedies suffered by miners and how despots accrued their bloody wealth." ( Foreword Reviews)
"Cleveland renders a sweeping look at colonists, industry titans, despots, and everyday mires in this look at the local and global context of what have come to be known as blood diamonds." ( Booklist)

What listeners say about Stones of Contention