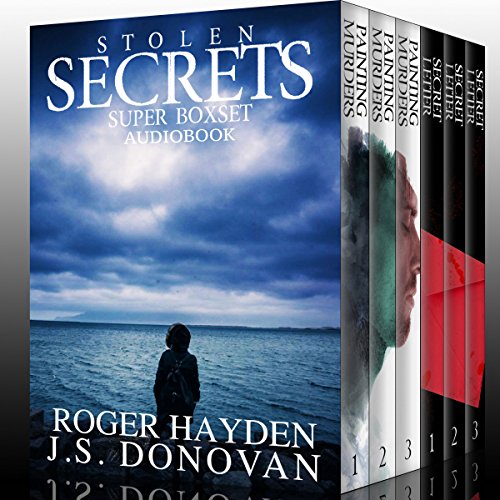 By: J.S Donovan,Roger Hayden
Narrated by: Ramona Master
Try for $0.00

A gripping psychological mystery with a brilliant twist.

Mystery masterminds J. S. Donovan, author of The Painting Murders, and Roger Hayden, author of The Secret Letter, which have collectively accumulated 200+ five-star reviews, come together in this super box set for the first time!

Newlywed artist Ellie Batter has it all: the perfect husband, the dream job, and a nice cushion of money earned through years of sacrifice and hard work. After creating her latest masterpiece, Ellie's entire world is flipped upside-down. What caused her to paint the bloodied stranger? Ellie didn't know, but days later, a woman of the painting's exact likeness is found dead. Obsessed with finding answers, Ellie quickly becomes the next target of a mysterious killer hunting artists throughout the city of Northampton, Massachusetts.

A mysterious chain letter is only the beginning to an inescapable nightmare. Homicide Detective Michael Dobson has seen many things in his long years on the force, but nothing can prepare him for a series of murders linked through the same mysterious chain letter mailed to the victims before their untimely demise. The answers lie in the victims’ pasts, leading Dobson and his rookie partner on a serpentine quest through the dark recesses of vengeance and betrayal. Can he stop the killer in time, or will a brutal fate await all who have made the killer’s list?

What listeners say about Stolen Secrets: A Collection of Riveting Mysteries

Good selection by good authors, interesting and keep ones interest with good narration. Given audio for my voluntary review

Another excellent and exciting boxset by this duo! I highly recommend this for anyone who likes a good twisted mystery