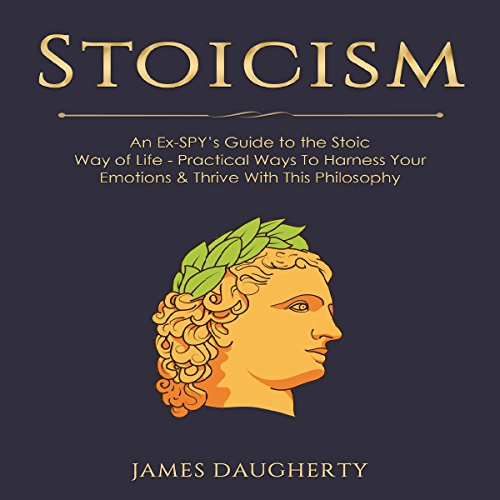 Stoicism: An Ex-Spy’s Guide to the Stoic Way of Life

By: James Daugherty
Narrated by: Spencer Jacobsen
Try for $0.00

Imagine how different your life would be if you knew practical ways to harness your emotions and thrive with the timeless philosophy of Stoicism.

Stoicism's ancient teachings are the very best playbook for adversity. Unlike many religious and new-age thinking methods, Stoic principles provide a clear road map on exactly “how” to think, not simply “what” to think, thus giving its practitioners methods to better deal with the misfortunes and hardships which come their way.

James Daugherty is an intelligence expert and former CIA spy who specializes in all forms of human behavior. But there’s one trait which is critical to a productive life, obtaining and retaining a pragmatic and stable mindset. A spy would be worthless without it.

Daugherty is a huge proponent of the Stoic philosophies, as a result of being exposed to highly stressful and testing situations over the years. A Stoic mindset is not a luxury for a field agent, but a necessity.

In this insightful second edition to the Stoicism series, Daugherty gives readers a firsthand look into:

What listeners say about Stoicism: An Ex-Spy’s Guide to the Stoic Way of Life

This audiobook goes through a detailed breakdown history of Stoicism, which if you are curious is an ancient greek teaching that values having knowledge and enduring pain and hardships with harmony. This philosophy resembles Taoism, but they both have been derived out of different cultures, so if you know the teaching of Taoism, then you may be interested in listening this to compare and contrast.

This audiobook interprets stoicism from the Classical Greek and Roman sources in a way that's accessible to practice for modern listeners- in much the same way that it explains that the Romans interpreted Stoicism and developed it in light of their own needs when they picked it up from the Greeks.

This is an excellent audiobook on the basics of Stoic philosophy, with an emphasis on Stoic practices and exercises. It could be listen straight through, but it could easily be used a reference because the structure of the audiobook is so strictly outlined and divided into sections according to the outline.

This is really very amazing audiobook, I am so much impressed to purchased this valuable audiobook. When i listen this audiobook i followed this all content which is explained very polite language, easy to understand. Excellent, informative, and useful listen into "how to live a good life". I've long been interested in Stoic philosophy, and this audiobook goes in depth into the ideas, how and why they're useful, and how to apply them.

This philosophy makes you a better human being. You learn how to deal with various situations. In turn, your life gets better with stoicism. Stoicism helps you to be able to carry yourself in a better way, whether it is emotionally or mentally. The more real you become by adapting stoicism, the easier it becomes for you to create a life that others dream about.

I thoroughly enjoyed this book. All the information he included let the listeners understand the whole process that was necessary to accomplish what James Daugherty did.

Covered the practical aspects of Soicism

It is a guide for those who looking for a way to becoming a stoic. This audiobook covered the practical aspects of the topic. I have learned how to deal with various situations. In turn, my life gets better with stoicism. Excellent listen!

This eloquently designed guide is abandon with the guidance to make us understand the term stoicism. This perfect guide is actually helpful in providing accurate counseling to train a person for developing confidence and achieving happiness.

I learned about stoicism, its history, and what makes it so important. It is a way of living based on ancient philosophy principles. The audiobook explains how this way of living helps you control your emotions, be a better person, and live a better life. It was a great listen.

It is a guide for the individuals who searching for an approach to turning into an unemotional. This audiobook secured the down to earth parts of the point. I have figured out how to manage different circumstances.