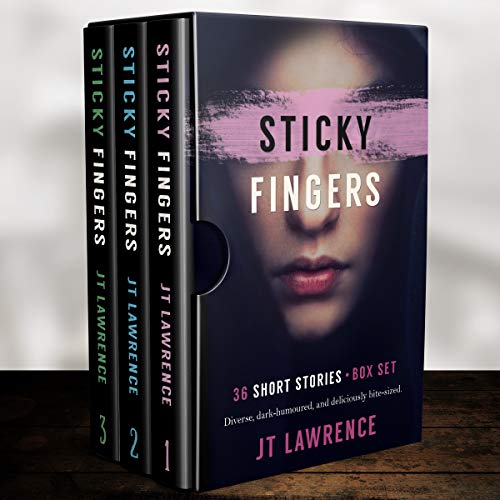 By: JT Lawrence
Narrated by: Roshina Ratnam,Bianca Flanders
Try for $0.00

Diverse, dark-humored, and deliciously bite-sized, this compelling collection of 36 short stories by JT Lawrence include:

If you're a fan of Roald Dahl or Gillian Flynn, you'll love these unsettling stories with a twist in the tale.

I’m not one in favor of short stories but I was requested to review this box set audiobook.
What I do know is that a short story got to grab you from the very first beginning all the way to the last word, but what incredible about this audiobook is that every chapter is a new story and if you ask me how JT Lawrence the author does it I can’t explain, truly amazing!
Narration by Roshina Ratnam and by Bianca Flanders is spot on.

Amazing myself but I fully recommend this audiobook.

In exchange for an honest review I’ve received this audiobook.

Best Buy for a Credit

This collection is, hands down, the best investment of an Audible credit I've seen so far. Published originally as three separate books, the Sticky Fingers stories are funny, poignant, politically relevant and wildly entertaining. I don't think there's a bad story in the entire collection and my only regret is that now that I've been through them all, I won't ever have the pleasure of discovering them again for the first time.

This collection is an interesting group of stories from creepy to delightful. I liked how each story was so different from the other, and I liked the shorter length. I enjoyed the narrator's voice.

This collection is a great collections of stories from creepy to delightful. Each story is quite different and just long enough, that the listener is not frustrated by having to leave the car and go in to work. I enjoyed the narrator's tone of voice, she was easy to listen to and easy to understand. I will happily try the other two books in the series.

Sticky Fingers is a set of well written and cleverly crafted short stories. The narrators did an excellent job conveying the tone of the stories, as if the author was narrating them herself. The stories range widely in subject matter, including horror, science fiction, detective, comedy, and slightly twisted stories of everyday life. You’ll find a heroic department store Santa, a tragic Viking warrior, the self deluded writer of a series of Trip Advisor reviews, and many other diverse characters and stories.

Interesting mix of stories. Some disturbing,some scary, some weird. The travel review stories were pretty funny and took some twisted turns too.

I love short stories and JT Lawrence is such a top-notch author that I jumped at the chance to get this. I am a big fan of Roshina Ratnam's narration, but Bianca Flanders did an exceptional job here as well. These stories are great and so varied in content. From the scary to the surreal, I don't think there was one that I can remember not enjoying. If you enjoy short stories, grab this collection because you will not be disappointed.

This is a collection of thirty-six twisted tales! This collection has a story for everyone. Some are dark, some are just twisted, all are entertaining. This is my third book by JT Lawrence and I enjoyed this one just as much as the others. If you enjoy twisted, dark and totally unexpected stories then you should give this author a try. The narration is well done. Both, Roshina Ratnam and Bianca Flanders do an excellent job telling these stories. Each give characters their own voices and emotions as well as reading at a nice pace. Overall, a very entertaining collection I will be recommending to my friends.

At 14+ hours, this listen was still too short. When it ended, I just wanted more!

I liked the narration although, at times, I was surprised to find out that a main character in a given story was male. The two female narrators had very pleasant voices but definitely not male.

These short stores are incredible. JT Lawrence is incredible. I loved every single minute.

this series is a bunch of short entertaining stories. there's something in here for everyone to enjoy


This is a collection of twelve short stories, all cleverly written and many with a twist at the end. Some of the stories are comical, and some are sad Every story has each own charm and horror.

There's something about a kettle...

Sticky Fingers, the Complete Box Set, is is the bringing together of three individual previously published volumes of short stories by talented author, J.T.!awrence. Having previously read, and been impressed by, the first of the books in this series, I requested and was generously and freely gifted with a complimentary copy by the rights holder.

Book one is narrated by Bianca Flanders and it is a reading rather than a performance, with little variation given to different character definition. The timbre of her voice is pleasant and well paced, she reads, too, with apparent understanding and her pronunciation crystal sharp. However, her slight accent (South African?) sometimes left me uncertain of a given word, as in the story entitled The Itch which I initially believed was called The Etch, to my puzzlement. This mistake rapidly was corrected but there were other occasions where the meaning remained unresolved. But overall, hers was a good narration.
Books two and three have Rushina Ratman as the narrator. Sho shares the best qualities of Ms.Flanders' reading but without the distracting accent, making each story a pleasure to hear.

Sticky Fingers is more than a collection of short stories. It is a coming together of a small group of individuals, each with some strange quirk which the author brings vividly to life for the reader. Not necessarily always likable, each is, however, interesting and well worth getting to know. It is a remarkable experience. The stories, although shorter than novellas, pack an imaginative charge which sometimes shock and sometimes inspire a more thoughtful consideration. Very few fail to impress. For this reader, one of the most terrifying was The Shelter, about a small group of people who, for twenty years, have hidden, below ground, from the ravages of war. Survival had radically reduced their life style, naturally, and they were dependent on help from the lone man who had aided them initially and continued to do so through the subsequent years, bringing comfort, food and news every month or so. Then suddenly he fails to arrive.
With each new tale, the author takes the reader inside the head of a character who is telling their own story, and occasionally there just might be another person already inside, as in the detective investigation, She Did It, another favourite. And not everything is as it first appears. Most are enjoyable, all very readable and strange but at the same time completely human and real, little tastes of the surprising unique individuality of people

Although the temptation is to listen to all of the books in just a few sittings, digestion is, of course, greatly improved if taken in bite sized pieces. And the shorter length of these varied and beautifully crafted stories means that they can be enjoyed at many different points in the day.
Recommended.

I was given this audiobook for free in exchange for an honest review.

I had already listened to sticky fingers 1 & 2 and had intended to skip straight to book 3. I accidentally started the first story and remembered enjoying it so figured I’d listen again. Same with the next, and the next...

Volume 3 tied up a few loose ends and connections with 1&2 and yet managed to be fresh & new. I’m a big fan of short stories anyway and this didn’t disappoint.

So worth every penny! The amount of stories & length of time in this means many hours of listening enjoyment.
The itch, eeek! Had me scratching!
The trip advisor stories, so funny & so clever, linked in such ways, well impressed!
A few linked to the full books written by this author that I’ve read or listened too, all impressive.
A full on twist and turn off great short tales. Enjoy

Okay first off I laughed so hard at Perkins, that man has a vivid imagination.
I loved how you opened and closed this book with two separate stories that were connected, it’s to bad about the ending of the first one though.
This is a great book for anyone to listen to or to read.

Really enjoyed all three books. Stories told well and are varied and keep you thinking long after they have finished. Recommended

Whatever your idea of heaven is, mine is Sticky Fingers by JT Lawrence. As a professed hater of short stories, I was looking forward to typing how much I would have enjoyed these if only they'd been longer. But, darn it, I can't say it! Each story was exactly the perfect length, and I loved them. How does Ms Lawrence do it? Fabulous full novels and deliciously dark short stories. Every story is perfectly constructed, with credible characters and delightful dialogue. No stone remains unturned, the reader is taken to places and put in situations that are so cleverly constructed and compelling, I could feel my heart singing with joy at the genius of the ideas. The twists and turns of all these original concepts are inspired and I gave a standing ovation at the end. As always Roshina Ratnam provides award winning narration, ably assisted by Bianca Flanders. Fourteen hours and nineteen minutes of sheer, unadulterated bliss. JT Lawrence - I salute you!

was ok went on a bit didnt hold my interest so took time to finish.

Brilliant collection of stories, what a surprising twist with "Bridgegate" at the final story, I look forward to listening to more of these.

I struggled with this set of short stories and lost interest after listening to part one (1 to 19). Some were quite good but others didn't seem to go anywhere. And the 'twists' were really quite predictable at times, particularly once you'd listened to a few. I also found the female narrator's voice on the majority of part one rather monotone and grating. I'll probably download and listen to part 2 at some point but it's not something I'll be rushing to do.