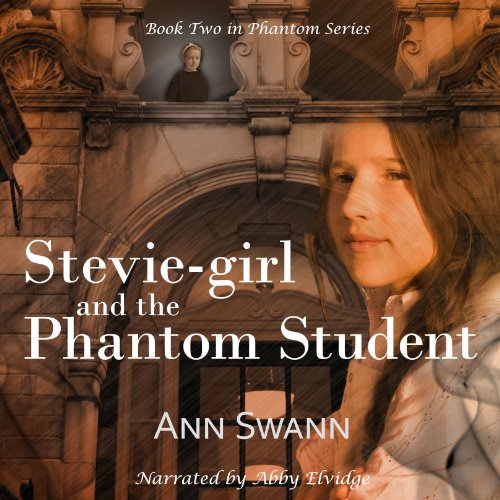 Stevie-girl and the Phantom Student

Bullies, freaks, and phantoms inhabit the abandoned elementary school. Would you go inside to help out a friend? Stevie asks Jase to help her find out why the ghost of a girl keeps appearing in her mirror. They think it has something to do with the new student at their school, a boy who has Tourette syndrome. Both the new kid and the new phantom seem to need some kind of help. When the new kid falls prey to the school bullies, Stevie knows they must act. But will they be too late, or will a tragic moment in their school's history be repeated on Halloween night?

What listeners say about Stevie-girl and the Phantom Student


In Phantom Student, Stevie is haunted by a young ghost girl who experiences awful every time she appears. It turns out the ghost is trying to protect Derol, a new boy in school with Tourette Syndrome, with whom Stevie and Jase befriend. Derol and the ghost girl are/were both victims of extreme bullying.This is a great follow up.

Where does Stevie-girl and the Phantom Student rank among all the audiobooks you’ve listened to so far?

I was a little weirded out by the changing of narrators, initially,but this one did a great job. No ranking allowed! If you want a kid-safe mystery, that's a cross between Nancy Drew and the Ghost Whisperer, this is it!

What was one of the most memorable moments of Stevie-girl and the Phantom Student?

Probably every scene that she and Jase had an understanding of Daryl's Tourette's Syndrome. Every scene made me either sob, or at least misty!

What does Abby Elvidge bring to the story that you wouldn’t experience if you just read the book?

She did a great job voicing the different characters. It took me a few minutes to warm up to a new voice-actor, for the series, but it ended up being awesome !

Well, Harry Potter already has Moaning Myrtle, and this is similar, so I would have to ask fans of that genre. They would know best!

Again, I was a little weirded out about the change in narrators. Once I got used to it, though, I was fine !

Absolutely!! These books are so morally pure and sweet....great for all ages....they warm my heart!!!!!

Stevie, she is sweet and kind...also very brave and smart!

Which character – as performed by Abby Elvidge – was your favorite?

Stevie....but I did love Daryl too....and of course Jase!

this would be a precious movie....it teaches such a wonderful lesson!!

I love love love these characters and this writers pure and wholesome style of writing....Although it is set in the 70s....it passes on valuable lessons for today's youth also....

In this story, Stevie starts seeing a little phantom girl in her mirror and gets a little scared...who wouldn't? lol Well she has Jase check it out and they go to school...a new kid joins there class...one who is different...his name is Daryl and he has Tourettes....he is different and shy...well bullies target people like that, and having such a big heart Stevie takes him into her circle of friends...we learn that the little phantom girl was a victim of bullies too...and through the kindness of Stevie and Jase they are able to help her move on and make a good new friend in Daryl!

I was wowed by the narrator. She has the absolute perfect voice to voiceover a book such as this, young, almost juvenile, yet capable of handling the older voices. Even though this book is for the younger set, I could not help but shed tears throughout. I loved the experience learning about a syndrome I didn’t know about — Tourette Syndrome.

Author Ann Swann had a mission. Her story told a tale of bullies and how they harm others. She introduces a student, Derol Pavey, different from other students. Not only is he from a foreign country, but he has Tourette Syndrome, which can be funny to watch if you don’t understand it (and perhaps even if you do).

Her stories in this series remind me of the books I read when young — you know, the Nancy Drew mysteries? Although Stevie-girl is much younger, she is brave, smart and stands for what is right. She is also very kind and considerate to her elders and other less fortunate. Steve-girl and Jase are wonderfully adorable children. They exemplify all we wish our children and ourselves could be.

This series takes me back to the time I was young. Ann Swann creates a setting very much authentic in my experience of the 1970’s and earlier. It was a time where people looked after people, somehow simpler than these days we live.

I enjoyed the role Stevie-girl’s grandfather plays — a man who loves his granddaughter enough to give her space to grow with responsibility. I absolutely loved the way Jase and Stevie-girl begin trusting each other, relying that the other would be there when needed. Their relationship deepens in book 2..

Adding the phantom, Sally-Jean, makes a great story, very much a mystery as to why she keeps appearing to Stevie-girl and then others. Ann Swann knows how to write a story for the young and old alike.

Stevie-girl and the Phantom Student, by Ann Swann is another YA delight. Stevie-girl, our plucky young heroine, and her best friend, Jase, thought they were done with spooky spirits when they helped The Phantom Pilot, in the first book of this delightful series.

Now its nearly Halloween and Stevie is being haunted by an apparition whenever she looks in the mirror. Is the ghost trying to tell her something? Does it have to do with the new student Dereyl? Is his disability the reason the ghost has suddenly started appearing? How can Stevie-girl and Jase help their new friend and solve the case of the Phantom Student?

Kudos to Ms. Swann for tackling the difficult subject of Tourette's Syndrome and bullying. And, moreover, for her gifted storytelling. I love all the marvelous references to the sixties, her dialog and descriptions that pull you fully into Stevie-girl's world. Well, as you can tell...I'm a big fan of Ms. Swann and this particular series. I listened to the Audible version of this story narrated by Abby Elvidge, whose narration really brought the characters to life.

I can't wait to begin the next adventure with Stevie-girl.

Stevie-girl and the Phantom Student Review

I really enjoyed this story. Great writing along with wonderful narration. I love Ann Swann's work and Abby Elvidge is one of my favorite narrators.

I wish my review could be longer however I'm likely having unexpected shoulder surgery.

Stevie-Girl and the Phantom Student is another charming ghost story by Ann Swan. This is the second book in the Phantom Trilogy. While I really enjoyed the first book, Stevie-Girl and the Phantom Pilot, Phantom Student is a much more developed story, with it's recording lasting 7 1/2 hours compared with nearly 3 hours for the first one. All of the books center around two teenagers, Stevie and Jase, as they experience life growing up in 1969/1970 Texas and ghosts needing assistance finding peace.

In Phantom Student, Stevie is haunted by a young ghost girl who experiences awful "fits" every time she appears. It turns out the ghost is trying to protect Derol, a new boy in school with Tourette Syndrome, with whom Stevie and Jase befriend. Derol and the ghost girl are/were both victims of extreme bullying.

What I enjoy most about the Phantom stories is the writer's ability to evoke emotions from a mere reading of them. For example, it is obvious that Jase and Stevie's friendship is slowing turning into a more meaningful relationship. I can't help but recall how I felt nearly 35 years ago when I first awkwardly stumbled around with my first "love." I've not thought about that time in my life in years - if not decades.

Abby Elvidge narrated and she did an outstanding job. She was very believable as teenagers and provided different voices for each of the characters - young and old. Simply put, she contributed immensely to my enjoyment of this audio book.

As I mentioned in my review of the first book in this series, the Phantom stories remind me of the Mediator Series by Meg Cabot. Like with that series, I recommended the Phantom books to my teen daughter, who quickly devoured them and enjoyed them as much as I did. If that is not a ringing endorsement I don't know what is!