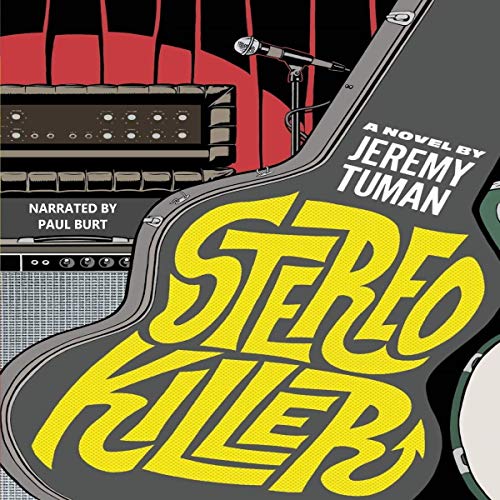 Jeremy Tuman’s incandescent novel Stereo Killer makes a joke out of the joke, "Let’s get the band back together, man." When the main character’s cynical former front man calls to see if Chet Screamer wants to take a respite from his job as a part-time high-school teacher, head to Europe for a reunion tour, set his SG on stun, and risk screwing up a potential new relationship, even before his undesired stint of celibacy gets broken, he reluctantly says yes. And so, the garage punkers the Stereo Killers are off on a low-budget summer blitz through dive bars, a journey on which the only sure things are dodgy-to-no sleeping accommodations, unpredictable audiences, too much boozing, and searing, primitive rock 'n' roll. This ain’t some rock-star return; this is the ear-busting reality of a band blasting back into the underground of trashy tunes and moments of jagged ecstasy.

This audiobook is fierce, true, hilarious, beautiful, tragic, and heavy with earned wisdom. Tuman’s prose is as in-your-face as a kid flung from a mosh pit or a guitar solo thrashed out while the guitarist is falling down. Tuman knows his characters, their musical salvation stories, and their hardships. He also knows what it’s like to be the best kind of losers, meaning those who find what they weren’t even sure was lost.

What listeners say about Stereo Killer

I’ve been listening to audiobooks for years, but it’s rare that I enjoy an audiobook as much as I did when I listened to Stereo Killer. Sure, I have listened to many books which I loved, but with Stereo Killer I am particularly happy that I experienced it as an audiobook. Jeremy Tuman’s raw and rapid fire writing coupled with Paul Burt’s lively and colorful narration made Stereo Killer a complete performance piece that I haven’t felt since the pairing of author Caroline Kepnes and narrator Santino Fontana in the audiobook version of You.

The story is highly entertaining while remaining believable. I’d like to think that some of this stuff actually happened to Tuman. The language is witty and is peppered with beloved albeit forgotten cultural references (e.g., Shut Up Little Man!). I don’t know if there has been a character I have enjoyed living vicariously through in an audiobook more than Chet Screamer as he tours with his spirited and unforgettable band around Europe. Being so immersed in Chet’s thoughts, backstory, and internal struggles, makes it impossible not to root for him and The Stereo Killers.

The book shifts in tone near its close, leaving the listener with a reflective ending that is thoughtful, philosophical, and beautifully written.

Punk Rock Chaos and a Sense of Humor

Stereo Killer is absolutely a book for music fans, particularly those of us who were ever into Punk Rock. Here you’ll meet Chet, a former punk now in the role of teacher to some less than enthused teenagers who have no idea about his past. It could easily be said that in many ways Chet himself is a bit less than enthused about it, though he can look back at that part of his life pretty readily and count himself among the more informed people who could be teaching his students. A little lost between both the mundane and everyday world of regular life and the punk life of his past, he’s still trying to find where he fits in his current life when Parker, his old bandmate calls him up and eggs him on to join him and a couple of others on a spontaneous tour of Europe born out of new interest for the old band. With some reticence, and the awareness that he had left for a reason, but no idea why he’d decided to, Chet starts to get ready for the middle-aged version of a garage punk tour de force-except what will he do about the life he’d just started to invest in? Will the woman he just connected with still be there when it’s over? Will HE still be there when it’s over?

This book is an absolute blast and more than worth your listening time! Paul Burt does an excellent job of conveying the scene, it’s characters, and the shifting changes of mood and character throughout, even doing a nice job with the musical bits. The book itself is just as complex and engaging as the punk rock scene it portrays, I’ll definitely be keeping an eye out for more books from Jeremy Tuman. If you’re looking for a general idea of the mood before listening or reading, think of things like SLC Punk! and High Fidelity, where both dramatic mood and humor are in play, all blended together with music and chaos.

hated it did not finish!!! do not waste your time downloading this book I hope I can a better book.