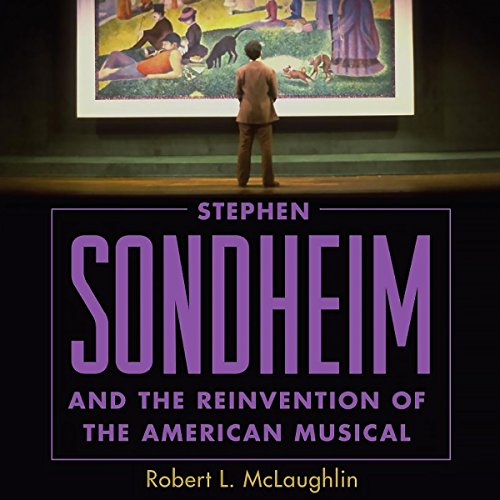 Stephen Sondheim and the Reinvention of the American Musical

By: Robert L. McLaughlin
Narrated by: David Stifel
Try for $0.00

From West Side Story in 1957 to Road Show in 2008, the musicals of Stephen Sondheim and his collaborators have challenged the conventions of American musical theater and expanded the possibilities of what musical plays can do, how they work, and what they mean. Sondheim's brilliant array of work, including such musicals as Company, Follies, Sweeney Todd, Sunday in the Park with George, and Into the Woods, has established him as the preeminent composer/lyricist of his, if not all, time.

Stephen Sondheim and the Reinvention of the American Musical places Sondheim's work in two contexts: the exhaustion of the musical play and the postmodernism that, by the 1960s, deeply influenced all the American arts. Sondheim's musicals are central to the transition from the Rodgers and Hammerstein - style musical that had dominated Broadway stages for 20 years to a new postmodern musical. This new style reclaimed many of the self-aware, performative techniques of the 1930s musical comedy to develop its themes of the breakdown of narrative knowledge and the fragmentation of identity.

Stephen Sondheim and the Reinvention of the American Musical offers close readings of all of Sondheim's musicals and finds in them critiques of the operation of power, questioning of conventional systems of knowledge, and explorations of contemporary identity.

"Will surely be required reading for students and scholars of modern musical theatre." (Robert Gordon, University of London)
"A must-read for any Sondheim lover." (Christianne Tisdale, acclaimed theater, film, and television actress)
"An astonishing achievement." (Peter Filichia, author of Broadway Musicals: The Biggest Hit and the Biggest Flop of the Season, 1959 to 2009)

I love the musicals of Stephen Sondheim. I was hoping for a biography of the artist and his work. I got an autopsy that uses every word in the thesaurus to analyze what musicals and what music really means within some objective cultural sense blah blah blah. This book goes on like that forever.
The book is a bit like listening to a NASA engineer talking about the interpersonal impact of the biological hormonal sensation known as "love". (Please stop!)
Listening to it I felt like saying, "just climb down from your ivory tower and tell us the story of Sondheim and his work!"
Someday someone will write a book about Stephen Sondheim, they will interview his friends and fellow artists they will interview his producers and performers who worked with him. They will write about Sondheim's philosophy and his inspiration behind his many great works.
But this isn't that book.

An ambitious dissertation that does not convince.

I'd thought that an erudite treatise on Sondheim's oeuvre might cheer me. Revisiting the music certainly did. Listening to a stack of brilliant original cast recordings is a reason for joy, and listening to familiar ones with a deeper appreciation of context, even more so. But McLaughlin contorts meaning to find connecting threads that strain credibility. Sometimes there is simply no "there" there, genius can exist on a purely emotional level, and it can be argued that a finite limit exists to the number of times one can hear the word "epistemological" in an essay.

Powerful Ideas For the Theatre Insider

McLaughlin draws satisfying and thought-provoking conclusions about both the history and the current state of musical theatre. It's a world divided by the struggle of achieving mass cultural appeal (the business) against innovating artistic expression (the show). Here, Mclaughlin thoughtfully explores the space between the two by focusing on the work of Sondheim, as it developed over the changing cultural landscape of his time.

This book is at its strongest when its scope is wide, when some of its denser ideas are brought to bear on greater trends in musical theatre. These dense ideas are necessary, but sometimes get weighed down in the philosophical language. Be prepared to rewind occasionally if you want to fully absorb this book. Highly recommended to insiders of the art form, especially directors and music directors.

This was a very informative and fun book to listen to.I enjoyed it.David Stifel was the perfect narrator.“I was voluntarily provided this free review copy audiobook by the author, narrator, or publisher.”