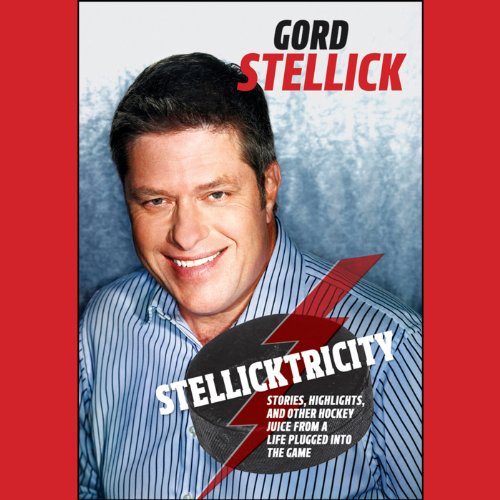 Stories, Highlights, and Other Hockey Juice from a Life Plugged into the Game
By: Gord Stellick
Narrated by: Jim Vann
Length: 7 hrs and 25 mins
Categories: Sports, Other
4 out of 5 stars 3.9 (7 ratings)

From the youngest general manager in NHL history to veteran on-air hockey analyst - Gord Stellick has seen it all, and now tells it all. Few have been given the opportunity to be on both sides of the hockey rink - managing the Leafs and the Rangers and then regaling his legion of TV and radio fans with the colourful insider knowledge he's amassed - about blockbuster trades, NHL stars, and the talent that got away. But Gord Stellick has. In an almost forty-year career, he's one of the best known hockey personalities around. And Stellicktricity captures the man, his career as the ultimate hockey insider, and insights and anecdotes on the game he loves so much.

Not only is the book crammed with details on hockey greats like Gretzky, Orr, Sakic, and Crosby, his NHL bosses (like Harold Ballard and Punch Imlach), but it also contains an inimitable look at Stellick's colleagues in the media. Destined to become a favourite of hockey fans everywhere, Stellicktricity not only covers every corner of the game of hockey but offers the author's unique view of other sports across North America.

Stellick is ubiquitous as a host, colour commentator, and analyst on hockey broadcasts and shows of all kinds in TV and radio. The book is loaded with Leafs content and brimming with anecdotes about legendary players, hockey management, and NHL characters (like Bob Goodenow and Wendel Clark). By turns serious and funny, every minute of Stellicktricity crackles with the wit and wisdom of a born raconteur - and the hard-headed, real world insights of a man who's lived and breathed the game of hockey for the better part of his life.

I have a library of several (!) hockey-related books. Ken Dryden's "The Game" is the gold standard by which I rate all of them. This one is just "OK". Fun at times, not so much fun at others, this book does have some personal glimpses of hockey legends and personalities, so I can't be overly hard on it. One critical note...The narrator butchered the pronunciation of several of the hockey player's names, so that was distracting. But it was a good read overall.