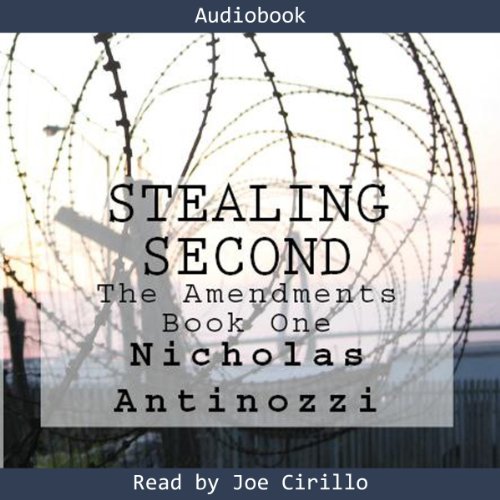 The Amendments
By: Nicholas Antinozzi
Narrated by: Joe Cirillo
Length: 7 hrs and 9 mins
Categories: Fiction, Contemporary
4 out of 5 stars 3.8 (33 ratings)

"A well regulated militia being necessary to the security of a free State, the right of the People to keep and bear arms shall not be infringed."

The freedom to defend oneself against all enemies, foreign and domestic, is the very definition of liberty. America’s Founding Fathers went to great lengths to ensure this right wasn’t infringed upon by future lawmakers. Still, to this day, politicians seem determined to undermine that freedom. Once that right is stripped away from the American People, freedom as we know it will cease to exist.

Stealing Second takes a look into future America, an unarmed America, where unmanned drones rule the skies and UN troops police the population. Across the country, detention camps spring up like weeds. Americans are given two weeks to turn in their firearms. But those who believe Americans will easily give up their arms have another thing coming. Washington only succeeds in angering the American People and the country plunges into a second revolutionary war. With the odds stacked heavily against them, Americans fight back to preserve their liberty.

Like many Americans, Gary Smith trusts the government to make his decisions for him. He lives in a world of self-imposed apathy, blissfully ignorant, and determined to remain so. Slowly, the blinders are removed from his eyes. Gary wakes up to find that the world he knows has suddenly changed. Too late, he realizes that he was part of the problem. Desperate to take back what has been stolen from him, Gary joins a group of likeminded individuals in a last-gasp effort to turn back the hands of time.

Powerfully written and uniquely entertaining, this timely tale is a story that begs to be read. However you feel about gun control, whatever side of the proverbial aisle you stand, Stealing Second is an important work of fiction. A plausible scenario that all Americans should consider before allowing our politicians to dismantle the Second Amendment.

Pulp fiction with a TEOTWAWKI flavor

What was most disappointing about Nicholas Antinozzi’s story?

Not a serious distopian book. Like a soap opera with some supernatural elements thrown in that happened to take place during a societal collapse.

I guess I am used to the James Welsey Rawles approach where it is more teaching than fiction (he does have some soap opera stuff in his too).

Would you try another book from Nicholas Antinozzi and/or Joe Cirillo?

Hey Nick,
More research would have been helpful, using key words and phrases you glean off MSN and by trolling survival websites just doesn’t cut it.

If you are looking for good books try James Wesley Rawles, A. American or even D. J. Molles
This was a horrible story and I am dumber for having listened to it

Would you ever listen to anything by Nicholas Antinozzi again?

This was another great, riveting book by Nicholas Antinozzi. His stories of everyday people whose lives are upended are - I'll say it again - riveting. I didn't want it to end and can't wait to listen to the next one in the trilogy. Joe Cirillo has such a fabulous voice. Listening to him read this book was a treat. Thanks, Nicholas and Joe!

Realistic plot, confusing to listen to

Would you listen to Stealing Second again? Why?

No, the characters sound like Grizzwald the Bear from the frontier commercials, several sound like Spicolli from Fast Times at Ridgemont High and I have a hard time believing that folks from MN sound like this at all..My dad was born and raised there and not one of my family sounds like anyone here.