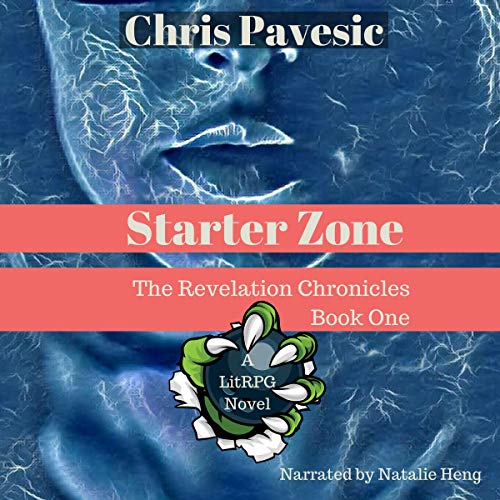 By: Chris Pavesic
Narrated by: Natalie Heng
Try for $0.00

When hydrologists inscribe the consciousness of a human mind onto a single drop of water, a Revelation sweeps the land. The wealthy race to upload their minds into self-contained virtual realities nicknamed Aquariums. In these containers people achieve every hope, dream, and desire. But governments wage war for control of the technology. Terrorist attacks cause massive destruction. The Aquariums fail. Inscribed human minds leech into the water cycle, wreaking havoc.

Street gangs rule the cities during the three years since the fall of civilization. Sixteen-year-old Cami and her younger sister Alby struggle to survive. Every drop of untreated water puts their lives in peril. Caught and imprisoned by soldiers who plan to sell them into slavery, Cami will do anything to escape and rescue her sister. Even if it means leaving the real word for a life in the realms, a new game-like reality created by the hydrologists for the chosen few.

But life in the realms isn't as simple as it seems. Magic, combat, gear scores, quests, and dungeons are all puzzles to be solved as the sisters navigate their new surroundings. And they encounter more dangerous enemies than any they faced in the real world.

Time to play the game.

What listeners say about Starter Zone

Cami and her sister Ally struggle to survive in a world that had collapsed after a new technology that gave people a chance to run a life anyway they please fall and ruin the water supply. Turning people against each other and different gangs ruling various areas. Suddenly they are given a chance at said world but will it be better than the one they left behind and can they keep the secret that they weren’t suppose to be there?

Note to narrator: you mispronounced Oregon

I have very little experience with RPGs, but found this really interesting. What a crazy world it is! The game world is definitely the safer place to be. The world has gone to hell in a handbasket. In this world, people's minds/consciousness can be put onto/into one drop of water, one measly drop. Only the rich can afford to do it, and their drops are put into a bigger "Aquarium," where your every wish and desire comes true. But, a war ensues as opposite sides fight to be the ones to control it. Mayhem and destruction follows and there's not much left after. The Aquariums crash and the water drop humans are all over the place, more mayhem ensues.

We meet a teenage girl named Cami and she and her little sister, Alby, are trying to survive in the aftermath of all of this. Cami and Alby are captured and have to fight their way out, and end up in a virtual reality world and must figure out what's going on and how to get out while facing some pretty formidable foes.

This is an interesting but crazy ride, I'm fairly new to this genre but really enjoyed this book :)

I was given this free review copy audiobook at my request and have voluntarily left this review.
Please take a moment to click the "YES" button below if you found this review helpful :) Thank you!

My experience of LitRPGs is that the characters are stuck in a game and are working to find a way out. This book throws that idea out the window and makes the game world far more safe than the real world.

Pavesic builds a terrifying world where society is collapsing, neighborhoods are controlled by gangs and maniacs and any drop of water could contain your doom. That right there is worth exploring in great detail but it gets forgotten in Act 2 when Cami and her sister are sent into the game.

Don't get me wrong, I was completely immersed in the world and I really would like to know what happens to the characters. Will they be trapped forever in the game world? Is there a way to put them back into their bodies? Are the NPCs more alive than they let on?

As far as the narrator, her voice is perfect for Cami. I can picture a world-weary teenager and her precocious little sister and they have my empathy. My only complaint is that she mispronounces several common English words.

Go ahead and give this one a listen. I will look for the next book, definitely.

Starter Zone is a great first in series. It lays the groundwork and introduces the reader to the characters and world. The world building and character development are in depth and on point. I quickly became invested in Cami and Alby and was listening whenever I could to see where the story took them. I do not want to give any spoilers but I did find the story slowed a little once the gaming aspect was introduced. The transition at that point was a tad to easy in my opinion however being as this is only book 1 I am sure there are many obstacles ahead. The narrator did a wonderful job bringing the story to life. I look forward to more in this series.

This book starts kind of slow and I almost lost interest. Thankfully, the story picked up and fully grabbed my interest. The game mechanics are a bit light for most LitRPG enthusiests, but I would still say it qualifies for the genre. All in all, it is a pretty decent story that is short but very well narrated. I think it is worth checking out if you aren't too picky about game mechanics and just want a good story with a unique approach to the game aspect of the story.

I enjoy playing video games, and love to read...this combined the best of both worlds! I really enjoyed the story of Cami and her sister. I think the premise was a new and interesting one as well. I would absolutely buy the next book!

starter Zone it's not just the name of the book

star stone is not just the name .of the book . it is exactly what this book is. this is if you have never read lit RPG novel then this is the book for you to get your to get you acquainted with it while it starts out slow it belts in its intensity and will allow you to get to understand the terminology that are part of this genre also this author shows promise if you read this we should definitely understand that this is a I first try cording to geek bites podcast there's definitely room for improvement which will come as the author or it's more about the genre and Lawrence from other authors this author's writings though a good read show something even more important this author has the potential to create a subgenre of a lit RPG that would be in the vein of Frank Herbert's Dune this office shows a great of current problems with fresh drinking water hopefully sir will bring more ideas that involve environmental problems but in a much more creative fashion basically people this author is someone to follow you can see that this author is at the beginning of their career and that they have the potential to rise to Heights that will have their books being study in universities in high schools if they can find that path it is not an unfair assessment to say that this could be the next Frank Herbert

This is my first Audible book and I am in love with the story. I plan to get all of the books in the series.
Try this author. You won't be disappointed.
The voice actress is terrific too.

This is the second book I’ve read/listened to by this author. I listened to Book 2: Traveler’s Zone first and loved it, so was excited to listen to this book.

Cami and her younger sister have been surviving on their own since their father died. People are at risk from every drop of water since the “Aquariums” failed. The people’s consciousness inscribed into droplets of water can get into a living persons body and fight for control of their mind. Eventually, caught by soldiers collecting people for the purpose of inscribing them into slavery against their will, Cami has not choice but to get her sister inscribed with her to keep her safe. Cami receives some help so they are instead inscribed as players. They learn things are not ideal and they must play the game to survive.

There is some learning of attributes and levelling up, but we are not constantly given stats etc. This is not a bad thing. I like the way the world of the game and the girl’s experiences are mingled. They are given quests and attempt to complete those quests. They are in the Starter Zone. This is where they learn the ins and outs before joining the greater game.

This is the second book I’ve listened to by this narrator ( Natalie Heng). She does a wonderful job narrating. She bring out the girls ages and personalities well.

At first I thought this was a dystopia from the way the book started but then the character is quickly put into another world where it is completely different to the one she lives in, you might even say better.
This is a different take on Virtual Reality. However, I found that the pace did slow as the main character got into this other world.