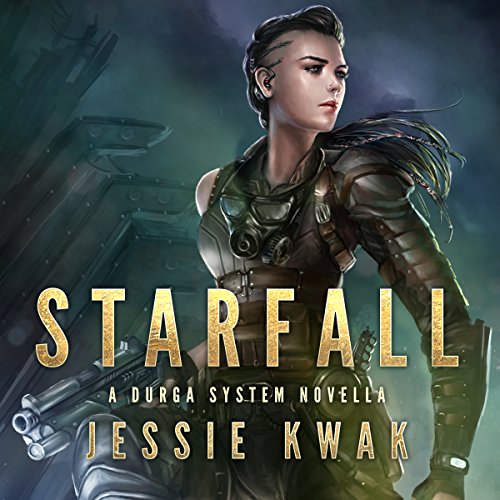 Starla Dusai is 15, deaf - and being held as an enemy combatant by the Indiran Alliance. Willem Jaantzen is a notorious crime lord about to end a fearsome vendetta - and most probably his life. When he learns his goddaughter has been captured by the Alliance, will he be able to save her?

Starfall is the first book in Jessie Kwak's Durga System series, a fast-paced series of gangster sci-fi novellas set in a far-future world where humans may have left their home planet to populate the stars - but they haven't managed to leave behind humanity's more unsavory tendencies. You'll find captivating characters and heart-pounding adventures, all with Kwak's customary sprinkling of wry humor.

What listeners say about Starfall

This is fun, fast, and introduces us to a richly conceived world without unnecessary exposition. I am looking forward to spending more time in this universe!

The opening sequence was my favorite. The world was a painting, and I couldn't get enough.

If you like any kind of sci-fi or fantasy books, then you'll love this. Its characters are rich and developed, and the story is solid and so enjoyable. The pacing and tension fit so well with the world Jessie Kwak created. I felt as though I was there, breathing with the characters and living their lives along with them.

Sci-Fi, but not a Space Opera

I went in to this expecting a space opera. While it is definitely sci-fi, it's not really a space opera. Spaceships and interplanetary relations, the exploration of deep space, etc., are present, but not center stage.

It took me a while to get in to, but it picked up after about half an hour in. The characters are well written and consistent, but don't "jump off the page."

I feel like Scott Dai's voice would be a lot of fun to listen to in real life, but it's deep enough that it's kind of hard to understand over a speaker or headphones. A few times I had to rewind simply because I couldn't understand what he was saying.

Be warned, there are a few f-bombs dropped in the course of the book. Two, if I remember correctly.

All in all, I'd say it's worth a read, and I'm interested to see what happens as the Durga System matures beyond a single novella.

I received a review audiobook of Starfall: A Durga System Novella by Jessie Kwak in exchange for my honest opinion.

Starla Dusai is a 15-year-old girl who has been separated from her family after her home was destroyed by the Alliance, and now she’s being held prisoner on an unfamiliar planet. She is also deaf. Willem Jaantzen is a known criminal, who also happens to be her Godfather. He is determined to save her. This novella follows both characters’ stories in alternating chapters, which intertwine to form an exciting sci-fi story.

I thoroughly enjoyed this novella. Kwak’s writing is fluid and filled with beautiful imagery. I loved how the ending of each chapter always left me wanting more. It was hard to stop listening!

I liked both the main characters of Starla and Jaantzen. It was refreshing to read a story about someone who is deaf. I’ve never come across a book with a deaf main character before, and now I hope to expand my horizons and read more in the future. Starla is a very likable character who has an interesting past, which I hope to hear more about in later installments. It was also fun to read about Jaantzen, a crime lord, who is also loyal to the people he cares about. I never felt like any of the characters were stereotypes or clichés; they were believable and had realistic dialogue, motivations, and personalities.

My only complaint is that as I was listening to the audiobook, it was hard to keep up with all of the characters. I’m more of a visual learner, so I think I would have better remembered who all the side characters were if I could have seen the names as opposed to just hearing them. That might have just been a personal issue though. The audiobook was narrated by Scott Dai who had a very easy voice to listen to.

I don’t often read sci-fi books, but I’m glad that I read this one! It was enjoyable and fast-paced, with a cast of characters I want to find out what happens to. I will definitely read future installments.

I was drawn into this book from the very first chapter. The writing is evocative, with beautiful, rich descriptions, and interesting characters. This is a great piece of sci fi, with fun explorations into the everyday lives of space pirates and back room dealings of interplanetary gangsters. I particularly appreciated the varied cast, from a deaf girl protagonist to Asian women mob bosses. It's so refreshing to read stories that include more kinds of people than just white men.
This is a fun, quick read & I can't wait for more of this series!