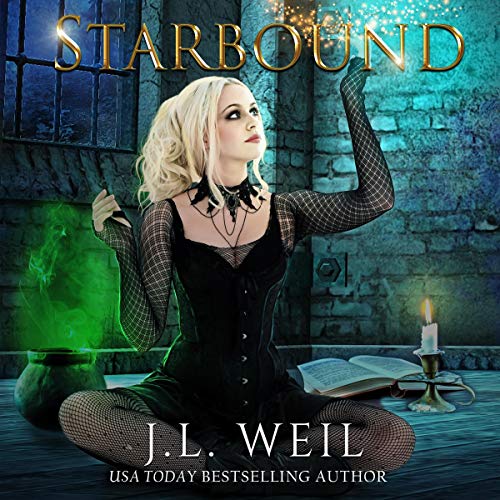 By: J.L. Weil
Narrated by: Emily Gittelman,Mark Whitten
Try for $0.00

Everyone, in some way, has been touched by magick. If you have the blood of a spider goddess flowing in your veins, it is a double whammy... and kind of creepy.

Katia Montgomery's life is charmed. She is pretty, popular, and dating the star basketball player. So then why is she miserable? There is so much more to Katia than endless parties, expensive clothes, and her social status - she is a nixie. Her world feels inadequate, lonely, and she can't shake the feeling that something or someone is missing. And that might just explain why she is suddenly crushing on the mouthwatering and forbidden Seth Nightingale.

Seth has always known that the sassy and spunky Katia is destined to be his - that they are starbound. While she goes through boyfriends like bubble gum, chewing them up and spitting them out, he stands in the shadows, unable to do anything about it, knowing he shouldn't care. Not a damn thing in his power can change their fates, and that... well, really blows, but it doesn't stop him from dreaming about her, craving her, loving her.

A dark curse hangs over their heads, one cast centuries before. Now it is up to Seth to be stronger than ever and resist the one girl he can never have... or risk killing them both. But the attraction between them is something neither can ignore.

And the curse, it's out for blood - their blood.

Recommended for ages 16+ due to language and sexual content.

What listeners say about Starbound

It was nice to read a book that wasn't a part of a trilogy or series for once. It was a good teen romance, and I enjoyed it even as an adult.

As the book's summary explains, there is a curse that will kill them if they are together. The author did a good job of making me feel the attraction between the characters, and I just kept thinking, if it was me, I'd take the chance on dying to be together for at least one night! Ha ha.

My main complaint is that most of the book was about the struggle in the characters' lives, and then the ending was super quick. All of the sudden she solved everything and it was over. I'd like to see them enjoy it for at least a chapter, and maybe even have to put some effort or research into the solution. Also, most of this could have been avoided if the people in the main character's live would just have told her what was happening (I know, then it wouldn't be an entertaining book, but it was frustrating).

This book is definitely a must read. It had me sitting on edge and kept me reading it to find out what was gonna happen next.

Very good story filled with many twists and turns. Either the narrator is off or the chapter section is off as the narrator was behind in stating chapters by two chapters.

Great Book! Hoping for a continuation of the story

Wow what a great novel. It does really well as a standalone but I'm really hoping that JL Weil decides to do more books about Seth & Kats.

Couldn't stop listening to it!