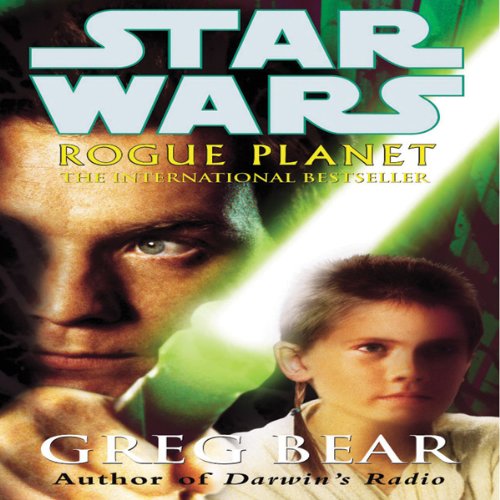 By: Greg Bear
Narrated by: Michael Cumpsty
Try for $0.00

Here is a stunning Star Wars novel, from one of science-fiction's greatest talents: Greg Bear.

Rogue Planet is an unforgettable journey stretching from the farthest reaches of known space to the battlefield of a young boy's heart, where a secret struggle is being waged that will decide the fate of billions.

That boy is 12-year-old Anakin Skywalker. The Force is strong in Anakin - so strong that the Jedi Council, despite misgivings, entrusted the young Jedi Knight Obi-Wan Kenobi with the mission of training him to become a Jedi Knight. Obi-Wan - like his slain Master, Qui-Gon - believes Anakin may be the chosen one, the Jedi destined to bring balance to the Force. But first Obi-Wan must help his undisciplined, idealistic apprentice, who still bears the scars of slavery, find his own balance.

Dispatched to the mysterious planet Zonama Sekot, source of the fastest ships in the galaxy, Obi-Wan and Anakin are swept up in a swirl of deadly intrigue and betrayal. For there are others who covet the power such superfast ships could bring. Raith Siener, a brilliant but unscrupulous weapons and ship designer, has the brains to decipher the Zonama Sekot ship design.

What listeners say about Star Wars

Seems to jar on the overall Star Wars mythos

Premise of the story introducing Anakin and how he interacts with the force as the chosen one is a bit to much. To overpowered. The main planet in the second half of the story again doesn’t feel right for the universe.
Performed brilliantly given the story itself.

Would you try another book written by Greg Bear or narrated by Michael Cumpsty?

This recording sounded very old, like it had been taken off of an old tape.

What was most disappointing about Greg Bear’s story?

Too much about aliens and spacecraft, not enough about characters. I would have preferred the characters to come first and the rambling descriptions of the mission to come second.

Also, not the writers fault, but some of this now seems outdated since other films came out. This is far too close to Phantom Menace and does not come into its own.