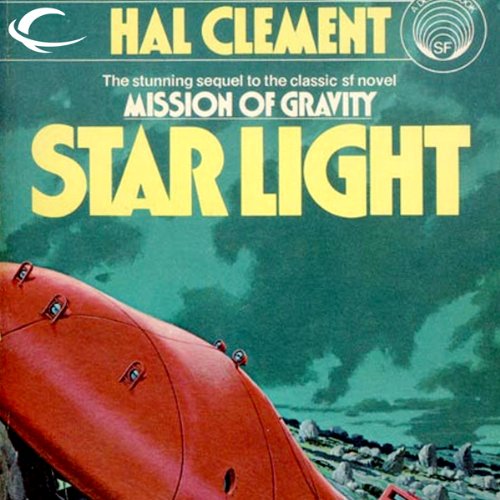 By: Hal Clement
Narrated by: Jeffrey Kafer
Try for $0.00

Dhrawn was a giant rockball, more than 3,000 times the mass of Earth. Perhaps a planet, perhaps a nearly dead star, the 17 billion square miles of mystery cried out for investigation. But its corrosive atmosphere and crushing gravity assured that no human would ever set foot on its surface. Those hardy, caterpillar-like Mesklinites, on the other hand, were ideally suited to explore Dhrawn, and their leader certainly knew a good deal when he saw one. So Barlennan, a shrewd sea captain if ever there was one, struck a sharp bargain with the Earthmen for his services in leading the expedition. But the humans might not have been so pleased with their side of the bargain, if they had known that Barlennan had plans of his own for Dhrawn.

The stunning sequel to the classic Sci-Fi novel Mission of Gravity.

What listeners say about Star Light

Your There and I'm Not

THE FACT THAT HE WAS SOME TEN OR TWELVE THOUSAND MILE FROM HELP...
Your there and I'm not, is a phrase us truck drivers know to well. I could certainly emphasize with the crew of the Kwembly. This is the story of the Mesklinities who were in Mission of Gravity, probably Clement's most famous book. The Mesklinities come from a planet whose spin is so fast that a day is 18 minutes long and their planet is shaped like a fried egg. You do not have to have read that book to enjoy this one, even though this is a sequel. What you do need is a love of science and I mean hard science. This will appeal to engineer types or those who love to hear all the details in how things are made and how they run. There is much chemistry in this book, where the Mesklinities go to Dhrawn, which is a giant rockball, more then 3,000 times the mass of Earth. There is converstation of rather Dhrawn is a planet or a failed sun. THE TEMPERATURE OUTSIDE WAS STILL JUST BELOW THE MELTING POINT OF PURE AMMONIA.

The Mesklinities are being paid by the humans to explore this world, since IT'S CORROSIVE ATMOSPHERE AND CRUSHING GRAVITY ASSURED THAT NO HUMAN WOULD EVER SET FOOT ON IT'S SURFACE. The Mesklinities run into big trouble and of course, they must get out of it themselves, cause YOUR THERE AND I'M NOT.

I gave this three stars, cause it is pretty much over my head. It is very well written, I just got lost in all the science talk. There are plenty out there who like their science hard and if that is you, you will love this.

I found Mission of Gravity and Iceworld a little easier to understand then this, if you don't want your science as hard, start with Iceworld.

Hal Clement's Star Light is a stand alone tale in his Mesklin universe. Humans are interested in exploring a 'heavy' planet where the gravity is to much for them with an ammonia / water atmosphere and mostly subzero temperatures. They outsource the exploration to Mesklins for which the planet has less gravity than their home world. There's a base camp and mobile units, but one has gone missing, or at least the crew has. Due to the Mesklin's more primitive state, humans have kept technology minimal. Problems arise, partly as a result of poor predictive capability regarding the weather. While these issues are being addressed, it comes to light that the Mesklins are scamming the humans in an attempt to set up a permanent presence on the world and embark on independent space travel.

Clement presents a hard science fiction story with much focus on the physical properties of materials under the unique surface conditions of the heavy world. The charade of a false base seemed a bit childish. At the same time, the limitation in science ability seemed an artificial constraint that was unnecessary. In the end, the final denouement was more of a "so what" than any big reveal.

The narration is adequate with reasonable character distinction and reasonable pacing making for a quick listen.

About 3 hours in, while waiting for the plot to develop, I realized it already had in the first 44 minutes. It is well written with regards to science and if you like hard science and statistics, you Wil most likely enjoy this book. For me, it was like watching paint dry - and in space. I was hoping for more understanding of the nature of the aliens, which in fairness might have been easier, had I read the prior book in the series. Much thought and work went into this book, kudos for that. So, it's me, not you, for this book. We broke up 4-1/2 hours in.

This is one of the better Hal Clement novels. It does what world building stories should do. And it is compelling.