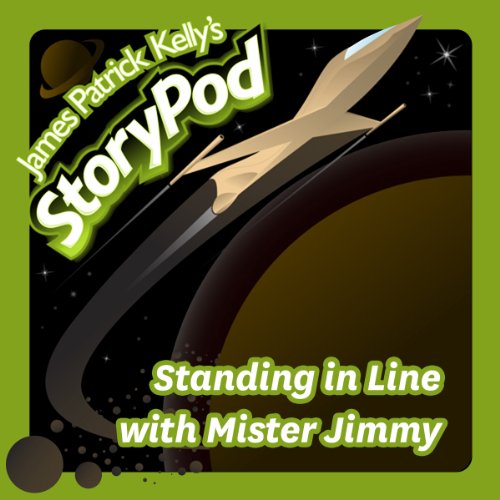 Standing in Line with Mister Jimmy

Standing in Line with Mister Jimmy

Chip's luck has run out. He's been on the dole for most of his life and now the government wants to ship him off to fight in the never-ending war in Mexico. But he has two things going for him: a cocky attitude and his thinkmate, an all-knowing personal digital assistant named Mr. Jimmy. Maybe the way to escape is to get in line to step through the mysterious door down the alley. Hundreds of people have passed through, but no one has come out.

James Patrick Kelly, author of this Nebula Award-nominated story, is a two-time winner of the Hugo Award and has been nominated 10 times for the Nebula Award. His stories appear frequently in Asimov's Science Fiction, and he writes the magazine's "On the Net" column. Publishers Weekly has called him "a meticulous craftsman in the demanding short-story form".

I actually liked the self narration quite a bit. Nice job James, I could see you narrating as a line of work also, Your voice is true and genuine, really enjoyed it. The story is pretty good, but boils down to a conversation about a boy and a girl in que. I think by virtue of being a short story it almost can't get a great rating, I mean how much character development can you do? So it is a pretty good story, and it was worth the couple of bucks I spent on it, but I would strongly advise against using a credit on it