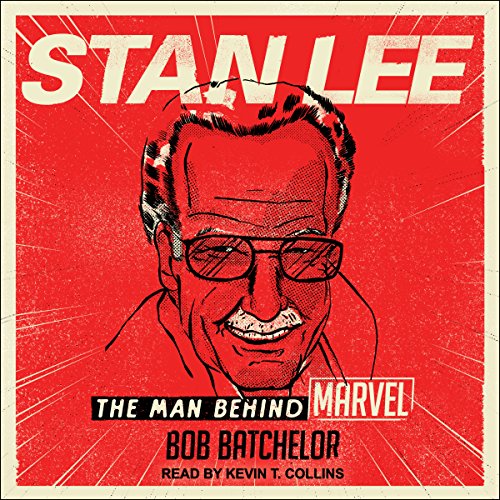 By: Bob Batchelor
Narrated by: Kevin T. Collins
Try for $0.00

From the mean streets of Depression-era New York City to recipient of the National Medal of Arts, Lee's life has been almost as remarkable as the thrilling adventures he spun for decades. From millions of comic books fans of the 1960s through billions of moviegoers around the globe, Stan Lee has touched more people than almost any person in the history of popular culture.

In Stan Lee: The Man behind Marvel, Bob Batchelor offers an eye-opening look at this iconic visionary, a man who created (with talented artists) many of history's most legendary characters. In this energetic and entertaining biography, Batchelor explores how Lee capitalized on natural talent and hard work to become the editor of Marvel Comics as a teenager. After toiling in the industry for decades, Lee threw caution to the wind and went for broke, co-creating the Fantastic Four, Spider-Man, Hulk, Iron Man, the X-Men, the Avengers, and others in a creative flurry that revolutionized comic books for generations. Marvel superheroes became a central part of pop culture, from collecting comics to innovative merchandising, from superhero action figures to the ever-present Spider-Man lunchbox.

Batchelor examines many of Lee's most beloved works, including the 1960s comics that transformed Marvel from a second-rate company to a legendary publisher. This book reveals the risks Lee took to bring the characters to life and Lee's tireless efforts to make comic books and superheroes part of mainstream culture for more than 50 years.

Stan Lee: The Man behind Marvel not only reveals why Lee developed into such a central figure in American entertainment history, but brings to life the cultural significance of comic books and how the superhero genre reflects ideas central to the American experience. Candid, authoritative, and utterly absorbing, this is a biography of a man who dreamed of one day writing the Great American Novel, but ended up doing so much more - changing American culture by creating new worlds and heroes that have entertained generations.

What listeners say about Stan Lee

I Love this audio book. I didn't care too much for such a deep background into the parents lives, but that's typically how these life story books are.

It was really great getting to know the man behind responsible for so much of my enjoyment as a youth. I read comics frequently and knowing Lee's inspiration help make sense of things. Thank you Stan Lee for helping to dream outside of my challenging youth. RV

So Moving I was Almost Brought to Tears Many Times

I didn't really know what to expect going into this book. I was hoping to at least gain a greater historical understanding of the powers that be behind Marvel's characters and the origin story of the origin stories. But, what I got something far more powerful and moving on top of my expectations.

Overall a good book about an amazing person. The reader did a nice job. My one complaint is that at times it felt like the author was repeating himself or presenting things in an odd order.

A book that tries to balance truth and puffery.

Stan Lee can be a polarizing figure for those who try to understand his impact on the comic book medium, and this book's attempt at an honest take is mixed at best.

For instance, the book does try to have some accounting of a dark side about Lee, like when Kirby was convinced Lee betrayed him to Martin Goodman in the 1940s. However, the book ignores certain facts that a few minutes research would have revealed to puff up Lee's "creations." This includes the obvious fact of how the Fantastic Four is an rework of Jack Kirby's earlier Challengers of the Unknown, albeit combined with Lee's ideas for deeper character play. There is also the laughable use of The X-Men as an example of Lee's original idea he told Kirby to do, when it has been suspected for decades that Lee created it by blatantly plagiarizing Arnold Drake's Doom Patrol series from DC.

When the author can't be bothered to mention basic facts like those, the puffery behind the book chokes the book's credibility

It's hard to listen to this audio. It feels like they hired a Disney voice actor that speaks in a "I'm a Prince" Voice....Not good.

I was skeptical, but it was informative and helpful for my collegiate course. Recommended.

I was disappointed. The book was more about the industry than the man. It was a boring story of a dynamic person. I would of found it insulting if I were Stan. Some of the History from Stans earlier years was very well done bit I think the author got lost in all the information.

It’s Amazing what Stan Lee accomplished in his lifetime when the odds are against him from the beginning. He’s truly an icon..

Loved it, it's a pleasure to get to know who Stan was, I had to watch the Marvel movies again after this. It makes you appreciate the super heroes in a more sort of nostalgic way. God bless Stan...