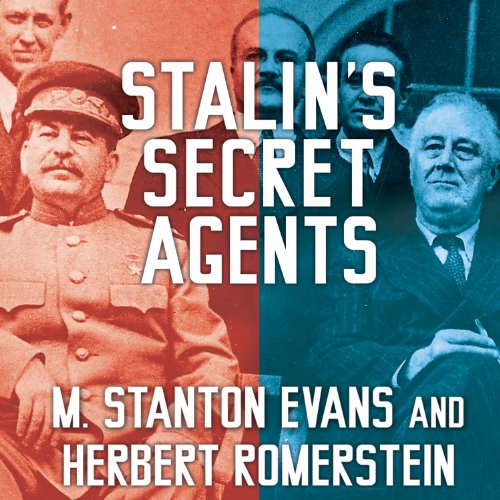 Most Americans have grown accustomed to accept the version of history that the Soviets were our noble allies and took the brunt of the casualties during World War II. But after decades of research by veteran journalist M. Stanton Evans and intelligence expert Herbert Romerstein, the truth has come to light and is now exposed in Stalin's Secret Agents.

Evans and Romerstein focus on the role of secret Communist Alger Hiss at the crucial Yalta Conference of 1945, where vast U.S. concessions were made to Russia, and the maneuvers of numerous other Soviet agents to serve the ends of Moscow. Fascinating details about the fall of China, Yugoslavia, and Poland to Communist domination as well as the identities of key conspirators in high places are revealed. The authors recount the steps by which the penetration occurred under FDR, the influence wielded by such advisers as Harry Hopkins and Henry Morgenthau, and the indifference of U.S. officials during this time. Also included are riveting details about the multi-layered cover-up - including rigged grand jury sessions - and the extent of the theft of secrets are sure to surprise and stun listeners everywhere.

What did you love best about Stalin's Secret Agents?

The amazing research that produced this book is clear, well written, and well analyzed. It is astonishing.

Harry Dexter White, because he was one of the best agents Stalin had. He and his fellow agents were able to shape America WWII policy and helped Stalin use America to enlarge his Communist Empire!

When I realized that so many Russian agents had taken over policy positions in the American government and pushed us into a war that claimed 500 thousand American lives.

Every single American should read/listen to this book. This is truly and excellent academic study of a subject that will be shocking to all Americans: The Soviet Leader, Joe Stalin, actually was able to use his agents in the American government to shape our war policy to help him enlarge his empire. If made into a movie, no one would believe it, and it is all true.

Now it all becomes clear...

What made the experience of listening to Stalin's Secret Agents the most enjoyable?

....All those U.S. WWII policies that don't make sense. Why was the U.S. so solicitous of Nationalist China so to foment war with Japan, only to three years later, dismiss China as feudal and corrupt? Why the insistence on unconditional surrender for both Germany and Japan? Why was Lend Lease to the Soviets so generous with nothing given in return? Why did the U.S. encourage the Soviets to enter the war against Japan, though the U.S. was on the cusp of victory? Why the vengeful Morgenthau Plan, that spurred the Germans to desperate fighting against the Western Allies, though the Red Army to the East was sweeping down?

Defenders of the Roosevelt Administration need conjure sundry and tortured explanations for how each of these inane policies were in the U.S. interest. The readers of Stalin's Secret Agents will, like Occam, have one explanation.

What was one of the most memorable moments of Stalin's Secret Agents?

The Truman Justice rigging of the Grand Jury.

A great history lesson all too often swept under the rug. I have a new appreciation for the events of this time and the results I see today.

This book is so outrageous I would wonder if it were true but the authors provide footnotes showing you how to verify much of it.
Like Stalin asked Roosevelt if he had any demand of the King of Saudi Arabia Roosevelt replied yes that he take Americas six million Jews.
This is a must read for any WW2 historian.

Also read his other book Blacklisted by History

This book shod be part of every Highschool and college level history course. His other book, Black Listed by History is a great read too.

A rare book of history and not “the sanitized version” for the unwashed as most authors. Needs to be read by every American so we restore real history. Thanks.

It’s unfortunate that many historians have downplayed or dismissed the effects of Soviet-communist infiltration into the Roosevelt and Truman Administrations. This well done and presented in the clearest of terms.

If you want to understand apparent “lapses” in the conduct of the DOJ in the last few years, or the last generation for that matter, read this. Our entire understanding of the Cold War is profoundly skewed to benefit the malignant actors on the Left. This is ESSENTIAL reading.

I had no idea to what extent the Soviets had infiltrated the American government in the 30’s and 40’s. A lot of familiar names. Relevant to this very day. A must listen!

Excellent outline of the Soviet threat which has now changed its name the titles are different but the mission is the same.