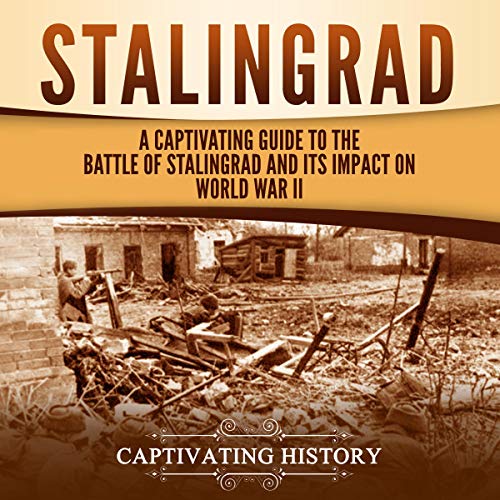 If you want to discover the captivating history of Stalingrad, then pay attention...

The Battle of Stalingrad is rightfully known as the “turning point” of the Second World War. Before the battle, which took place from August 1942 until the beginning of February 1943, the Germans were victorious everywhere, despite some localized setbacks (for example, at Moscow in 1941). After Stalingrad, the Germans were constantly pushed back, with some notable examples being Kursk in the summer of 1943 and the Bulge in 1944.

During WW II, the Soviet Union suffered somewhere in the neighborhood of 20 million dead. For those of you in the United States and the United Kingdom, the death toll for those nations in the war was around 415,000 and 483,000, respectively. In the approximate six months of the Battle of Stalingrad, the Germans, their Hungarian, Romanian, and Italian allies, and the Soviets lost an estimated one million men.

In Stalingrad: A Captivating Guide to the Battle of Stalingrad and Its Impact on World War II, you will discover chapters such as:

So, if you want to learn more about Stalingrad, scroll up and click the "buy now" button!

What listeners say about Stalingrad

Freedom has a high price.

This is a very good AUDIObook, reliable, and interesting to those of us who wish that there were more biographies of Red Army soldiers that were available to Western military buffs.

Highly suggest this one to anyone involved in analyzing the day-to-day life of an avowed Communist party member soldier who genuinely understood he was fighting to save the world for Comrade Stalin. This is a superb book and it will become a model in the annals of military experiences.

If you liked this book I would greatly suggest this about the German side with Survivors of Stalingrad: Observer judges of the 6th Army, 1943-43 by Reinhold Busch and Guy Sajer’s masterwork The Forgotten Soldier. For more on the Russian experience.

A beautiful description of a soldier who saw so much action and must have survived due to luck, soldier sense, and his role as a mortarman. At times this is explained like the Forgotten Soldier. A must-guide.

Tells you how it was

This audiobook tells the story of a common Russian soldier officer in WWII. It gets you from the time he joined, early 42 to his being wounded in late 44. You get a concept of how it was, the good and the bad. The audiobook is chock-full of stories of the march, the combat, the stories, and all of that.

Stalingrad seems a good balance between giving the details whilst remaining clear. Captivating History leads up to the results at Stalingrad with some background to the attack and its aftermath.

The individual descriptions from both sides are gut-wrenching from the view of the common soldier, the whole stigma for life is brought out for all users to see.

Wow, if you have any concerns about WW2 then this is a basic guide. A true insight into the "hell" that both sides stayed in one of the rudest battles ever.

The individual reports from both sides are gut-wrenching from the view of the common soldier, the complete disdain for life is brought out for all users to see.

The heart of the audiobook focuses on the Soviet comrades' ridiculous capacity to remain plus, eventually, the power of Soviet generals to mount an effective counter-attack. A must-audiobook.