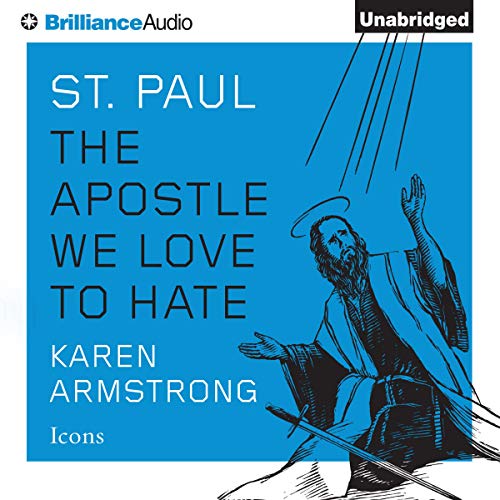 St. Paul: The Apostle We Love to Hate

St. Paul is known throughout the world as the first Christian writer, authoring fourteen of the twenty-seven books in the New Testament. But as Karen Armstrong demonstrates in St. Paul: The Apostle We Love to Hate, he also exerted a more significant influence on the spread of Christianity throughout the world than any other figure in history. It was Paul who established the first Christian churches in Europe and Asia in the first century, Paul who transformed a minor sect into the largest religion produced by Western civilization, and Paul who advanced the revolutionary idea that Christ could serve as a model for the possibility of transcendence. While we know little about some aspects of the life of St. Paul - his upbringing, the details of his death - his dramatic vision of God on the road to Damascus is one of the most powerful stories in the history of Christianity, and the life that followed forever changed the course of history.

What listeners say about St. Paul: The Apostle We Love to Hate

Author is one with her title, she loves to hate Paul (& what he means to the Kingdom)

From the beginning, when she employs the false CE rather than AD, my suspicion was that the author had an axe to grind. (Actually, even the title was off-putting, but having the Spirit, I am aware of the hatred the religious and the so-called Christian-Judaizers held for him.) I decided to rate this pulp-fiction when Armstrong “enlightened” her like-minded readers with how the 4 Gospel writers concocted an elaborate scheme for His resurrection.
The single star awarded is to acknowledge that the dead in their sins cannot know even the elementary truths that Holy Scripture hides from the lost; Truths that are freely given to those whom Jesus Christ loves and saves, those in whom the Holy Spirit dwells.
Recommendation: If you are seeking the Truth that is embodied in Christ Jesus, this folderol does not contain it; but, if you’re simply writing about the opinions of the uninspired, you may find value herein. I suggest the written version as the author as narrator is a bit distracting.

A short look at the life of Paul

Karen Armstrong is a multiple award-winning author of more than 25 books, the great majority of them exploring religion. She is particularly interested in Islam, Christianity and Judaism.

This book is aimed at the informed layman - not at other historians or religious experts. I read A LOT of history and have gone to church my entire life, but I can get lost in the weeds pretty quickly if too much professional jargon is used. Armstrong assumes a basic knowledge of the Christianity and of the New Testament. Nothing too complicated or deep and most of my Bible knowledge comes from Sunday school and small group Bible studies led by layman with a workbook. Armstrong takes care to explain things along the way because she is not out to impress the intellectuals - she has written a history for regular folks.

Paul has always been interesting to me. His writings have always seemed to me to be the first real attempt to move Jesus' teachings into a formal religion. There are times when I find his writings to be quite inspirational. At other times, he strikes me as obtuse and misogynistic. But, I wanted to get into the book to have a better understanding of what he was teaching and when he taught it.

The first thing that surprised me was the concept of Deutero-Pauline letters. Many scholars are now assuming that nearly half of the New Testament letters from Paul were not actually written by Paul, but by writers that came after him and used his name. This was a fairly common practice in Roman times - if you liked an author, you just borrowed his name. The evidence for this comes from analyzing the vocabulary used, the writing styles and changes in theology.

For me, this mostly cleared up one of my major frustrations with Paul - his inconsistencies. I say mostly because he still had some, but not nearly as many.

Her biography of Paul was interesting, but a bit skimpy since the audiobook was only a little over 5 hours long. But, it does hit the main points and I ended up feeling much more informed than I was before I started. I wish she had added more about his impact on the development of the Church over the nearly 2,000 years since his death.

This audiobook was read by the author. Sometimes, that can be a problem because being a great author is not the same thing as being a great audiobook reader. However, Armstrong has considerable experience with public speaking and her performance was quite good.

I rate this audiobook 5 stars out of 5.

Very good,lots of information I never knew. I will listen again. it has changed the way I understood the new testament.

It is always pleasing to hear the author - who after all knows exactly what they are writing about - read their own book confidently and proficiently. Karen Armstrong presents a fine reading of her own work here.

I was not entirely sure where this particular audio book would take me. As an atheist, I am interested more in the Christian church's history and how its teachings change over time than in the 'legend'. Unfortunately, the author here fails to adequately scrutinise some of the church's founding myths, and in particular discusses the resurrection early before a much later mention of clear doubts about how the Roman Empire would actually deal with someone from the lowest classes who was causing a disturbance. It is also not clear who the historical Jesus might have been (though scholars are generally agreed on his existence), and how that person lived and preached during his own life; this was skirted over in discussions of him.

It was good on the other hand that Dr (honorary) Armstrong steered clear of the works that are known to be of non-Pauline origin until discussing them and their purpose near the end of her book.

She also ended with a dig at those who are preaching the 'prosperity gospel', and rightly so. Paul was as close as one could come to socialist in his beliefs, as allegedly was Jesus before him. His focus on equality is made clear in this book as in his (genuine) letters.

This book did deal briefly with the post-Pauline world, but seemed quite abrupt in its ending. The longer-term impact of Paul - and how his place in the New Testament was cemented - were barely touched upon.

Overall, somewhat interesting but could have done with closer analysis of fact vs. myth and a more extensive discussion of Paul after Paul.

I was hoping for some fresh insights on Paul. Nothing. The title was enticing but the content very disappointing

Finished this in one sitting .

This short and accessible book is an honest, thought-provoking, and inspiring discussion of Paul’s life and letters. It uses information gleaned from historical methods but the author clearly likes and admires Paul without being infatuated by him. In my view, Karen Armstrong does a wonderful job of separating information from disinformation involving Paul’s life and beliefs. I found it an excellent complement to rereading Paul’s letters after each was covered in the book.

The man behind the controversy

A much needed reality check on the most misunderstood apostle and influential thinker of the Christian faith. The author is a master storyteller that asks important questions based on contemporary evidence and what is known so far about the period regarding the authorship of some of the Epistles, pastoral letters and other documents attributed to Paul. In doing so, she presents to us a man whose voice was appropriated by nearly every Christian sect and movement which led to the real one becoming a lost memory.
Paul is the one of the early writer's and Christian leaders that has fascinated me the most. Before there was even such a thing as a Christian Church, Paul, like others who followed the teachings of Jesus, attempted to bridge the old with the new, believing Jesus was another chapter of the Jewish faith that was also invited gentiles into becoming part of this reformed ministry. Unfortunately, Paul fell victim to many of the conflicting interpretations and disagreements his fellow peers had in regards on how to take this new ministry, not to mention the disagreements from his fellow Jewish brethren as well as Rome's discontent.
Karen Armstrong perfectly illustrates this turbulent period which Paul lived in and males well grounded inferences as to the reasons he was (possibly) appropriated by splinter groups and why they ended becoming the dominant branch of Christian theology.

Interesting viewpoint I partially agree with

The book is well written and very interesting. Takes the view that many books that claim to be written by Paul were written by other people. Most commentaries disagree (so do I) but I do agree with many other things in the book. I'm glad I read it.

Well done biography with a balance between a pure historical account and a spiritual awareness. It shouldn't distress the agnostic reader or the reverant one. If there is a bent it is one of an academic view of Paul. this is not a prayer book but a reflection on one man's journey and the profound impact he had.

Paul - baddie or goodie or both?

Few are indifferent to Paul, who gave us that wonderful hymn to love in 1Cor:13, but who also possibly (Armstrong challenges this) ordered women to cover up and shut up in church. It is a concise knowledgeable account of the life and work of Paul of Tarsus, as far as we are able to reconstruct it, taking account of recent scholarship, and avoiding dogmatism.

I don't usually like author read books as, writing a good book, does not apparently equate to being a good reader, however, in this instance I found Karen Armstrong's reading worked well. I found the establishment of Paul's history and conversion as well as the contextualisation of Paul's relationship with other disciples and the Jesus cults very informative.

I don't hate Paul any longer...

I read this because I've always struggled with Paul's teaching, which I find unintelligible, longwinded and contradictory. Turns out, the author says he didn't write most of the most controversial books. She gives tons of context, but her style is almost too authoritative as she rarely explains the sources of her claims (maybe those are in the footnotes of the written book, which didn't translate to the audiobook?) After the first chapter, which was incredibly compelling, the text became increasingly dense and hard to follow. I finished it simply by listening when I was walking home from work with nothing better to do. It had some great insights, but not written for the layperson (she'd made a TV documentary preciously so I wrongly assumed she'd be good at communicating clearly and engagingly)