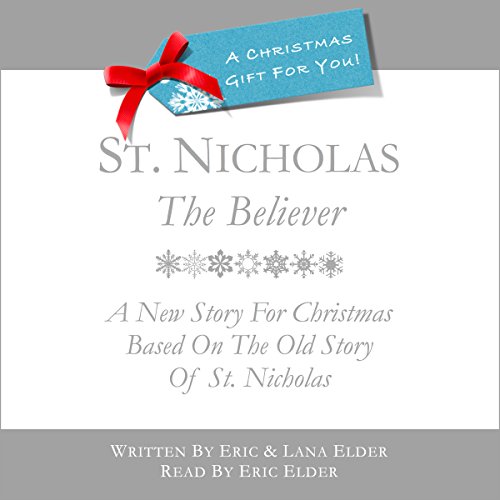 A New Story for Christmas Based on the Old Story of St. Nicholas
By: Eric Elder, Lana Elder
Narrated by: Eric Elder
Length: 3 hrs and 14 mins
Categories: Children's Audiobooks, Holidays & Celebrations
4.9 out of 5 stars 4.9 (8 ratings)

From the Introduction by Eric Elder

There was a time when I almost gave up celebrating Christmas. Our kids were still young and weren't yet hooked on the idea of Santa Claus and presents, Christmas trees and decorations. I had read that the Puritans who first came to America were so zealous in their faith that they didn't celebrate Christmas at all. Instead they charged fines to businesses in their community who failed to keep their shops open on Christmas day. They didn't want anything to do with a holiday that was, they felt, rooted in paganism. As a new believer and a new father myself, the idea of going against the flow of the excesses of Christmas had its appeal, at least in some respects.

Then I read an article by a man who simply loved celebrating Christmas. He could think of no greater way to celebrate the birth of the most important figure in human history than throwing the grandest of parties for Him - gathering and feasting and sharing gifts with as many of his family and friends as possible. This man was a pastor of deep faith and great joy. For him, the joy of Christ's birth was so wondrous that he reveled in every aspect of Christmas, including all the planning, decorating and activities that went along with it. He even loved bringing Santa Claus into the festivities, our modern-day version of the very real and very ancient Saint Nicholas, a man of deep faith and great joy as well who Himself worshipped and adored the Baby who was born in Bethlehem.

So why not celebrate the birth of Christ? Why not make it the biggest party of the year? Why not make it the "Hap-Happiest season of all"? I was sold. Christmas could stay - and my kids would be much hap-happier for it, too. I dove back into celebrating Christmas with full vigor, and at the same time took a closer look into the life of the real Saint Nicholas, a man who seemed almost irremovably intertwined with this Holy Day. I discovered that Saint Nicholas and Santa Claus were indeed the same...

What listeners say about St. Nicholas, The Believer

Great retelling of the origin of Santa

I loved hearing about the origins of St. Nicholas, whom we now know as Santa. Great book that speaks to our circumstances even today.

Great story based on the life of St. Nicholas

Lana and Eric Elder do a fantastic job of bringing Saint Nicholas' epic life in this riveting novel. It will capture your attention and hopefully inspire a desire to be more like this Saint, more, like Jesus Christ. He served Jesus Christ, his Lord, Savior, and God with all his life. Will you?